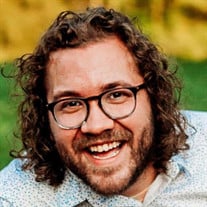 Marcus Lee MtCastle, age 29, passed away unexpectedly at his residence in Brooklyn, NY, on Friday, October 8th, 2021. Marcus was born in Napoleon, Ohio, on March 6th, 1992, to Marvin and Julie MtCastle. He attended Napoleon Area Schools, graduating in 2010. Marcus had a love for music from the day he was born and loved being on stage, being in his first musical at the age of 9 with many more to follow. He loved playing the piano, his ukulele, and singing. He began going to church camp at Camp Mowana at the age of 6 and spent his college summers as a counselor there, making many lifelong friendships along the way. Camp Mowana has always been a place very dear to his heart. He went on to pursue his love of music at Capital University in Columbus, being accepted in the Conservatory of Music and the Capital University Chapel Choir. He took a semester off school to join a Youth Encounter Team and travel the country singing and preaching God’s Word. He came back to Capital and graduated in 2014 with a degree in Psychology and minor in music. He went on to work at Nationwide Children’s Hospital in Columbus for a year before his heart led him on an entirely new adventure, deciding to join the Peace Corps. He spent 2-1/2 years in Thailand, teaching English as a second language to children and starting a library in the school. He again made many, many lifelong friendships. He returned from the Peace Corps in 2018 and moved to New York to attend grad school at NYU. He graduated in 2020 with a Master’s degree in Social Work and began working at WIN, a homeless shelter for women and children. His goal was always to change the world, one person at a time. He was well on his way and had so much more to give. Marcus never knew a stranger and had friends all across the continent. He had a way of making people feel so special. His light and legacy of love will live on forever. Marcus is survived by his parents, Marv and Julie, brothers Jeff (Kari), Matt (Stephanie), niece Cameron and nephew Jax (who both adored him), many aunts, uncles, cousins, and literally hundreds of friends around the world. His passing will leave a hole in the hearts of many. Funeral will be held at 11 a.m. on Saturday, Oct. 16th at Emanuel Lutheran Church 810 Scott St. Napoleon, Ohio. Visitation will be held on Friday from 2- 8 p.m. at the Rodenberger-Gray Funeral Home 1010 Westmoreland Ave. Napoleon, Ohio and Saturday from 10-11 a.m. at the church. In lieu of flowers and gifts and to keep with Marcus’s giving nature, memorials are to be directed to Women In Need (WIN), The Trevor Project, or the Epilepsy Foundation. Online Condolences may be made at www.rodenbergergray.com.

The family of Marcus Mt.Castle created this Life Tributes page to make it easy to share your memories.

Marcus Lee MtCastle, age 29, passed away unexpectedly at his...

Send flowers to the Mt.Castle family.