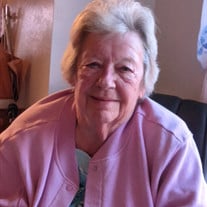 Madelyn Long, 82, of Deming, New Mexico, formerly of Liberty Center, Ohio passed away on March 15, 2022. She was the daughter of the late Charles and Grace (Gerkins) Minnick of Liberty Center, Ohio. Madelyn married Richard Long on August 4, 1956, in Grand Rapids, Ohio, who preceded her in death in 1990. While Richard was alive, they loved to travel, spending winters in Southern California and summers with their daughters and grandchildren. She worked as a meat cutter and loved to sew, making several quilts and sewn rugs. Madelyn is survived by her three daughters, Julie (Curt) Bingham, Defiance, Ohio; Barb (Barry) Parker, Garret, Indiana, and Karen (Scott) Pulsifer, Clastskanie, Oregon; five grandchildren; nine great grandchildren; and one great great grandchild. Also, her sister, Carol Leonard and brother, Norm Minnick, both of Napoleon, Ohio. Services will be private for the family. Memorial contributions may be made to Promedica Hospice. Online condolences may be shared with the family at rodenbergergray.com. Arrangements entrusted to Rodenberger-Gray, Napoleon.

The family of Madelyn Long created this Life Tributes page to make it easy to share your memories.

Send flowers to the Long family.