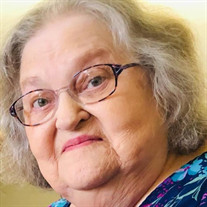 Lila Mae Jennings 82, of Holgate Ohio (formerly of McClure, Ohio) passed away peacefully on Sunday October 10, 2021 at Van Crest nursing home of Holgate, Ohio. She was met in Heaven by her son Tom, her parents, and several other family members. Lila was born on July 1, 1939 to Myron and Lena (Shank) Brenneman in Cloverdale, Ohio in Putnam County. She attended Damascus Local School in McClure and started working right out of High School at Hoffman Produce in McClure, Tem-Cole Radish Factory of McClure, and Equity Meats in North Baltimore Ohio for well over 25 years. She was a loving mother and grandmother. She most enjoyed holidays with her family and the loves of her life were her great grandchildren. She was the best pie maker and taught many family members how to make them to her standards. Her homemade chicken and noodles were always a close second. And, she was the MOST EXCELLENT back scratcher around, just ask her three Great Grandsons. When it came to sports, she was an avid fan. If her Buckeyes and Browns were playing, you knew where to find her. Lila also enjoyed game shows and time spent with friends. She made many friends at Van Crest of Holgate who quickly became family to her. Lila is survived by three grandchildren, Melissa (Aaron) Ehlers of McClure, Danielle (Troy) Kuesel of Deshler and Brian Jennings of Hamler; five great grandchildren, whom she loved with her whole heart, Haden, Zachary, and Trenton Ehlers, and Kaidyn and Nash Kuesel; Several nieces and nephews and great nieces and nephews and Daughter-In-Law Brenda Jennings; siblings, Joyce Winkle of Napoleon, Alice Epley of Mount Cory, Shirley (Jerry) Kistner of McClure, Nancy (Greg) Smith of McClure, Bob Brenneman of McClure; and Sister-ln-Law, Bonnie Brenneman of McClure. She was preceded in death by her parents; son, Tom; sisters, Kay Andrews, Linda Brenneman; still born sister Anita Brenneman; brother, Chet Brenneman; and half brother, Donald Shank. Funeral Service will be held on Saturday, October 16th at 11:00 am at the Rodenberger-Gray Funeral Home, McClure. Interment will follow in Hockman Cemetery Visitation for Lila will be on Friday at the McClure Funeral Home from 4-7:00 pm. Donations in Lila’s name are suggested to St. Jude’s Children’s Research Hospital or Paws for Purple Hearts – Warriors Helping Warriors, or a charity of your choice. Online condolences may be made to the family at rodenbergergray.com

Lila Mae Jennings 82, of Holgate Ohio (formerly of McClure, Ohio) passed away peacefully on Sunday October 10, 2021 at Van Crest nursing home of Holgate, Ohio. She was met in Heaven by her son Tom, her parents, and several other family members. Lila... View Obituary & Service Information

The family of Lila Mae Jennings created this Life Tributes page to make it easy to share your memories.

Send flowers to the Jennings family.