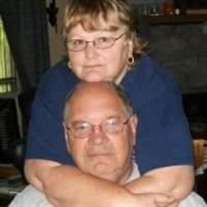 Leon C. Keller, 79, of Napoleon, Ohio died heroically in a house fire on June 19th, 2020. He was born October 5, 1940 in Cobleskill, New York to the late Karold and Ethel (Hayden) Keller. On March 17, 2001, he married the love of his life, Darlene (Huntley) Keller in Essexville, Michigan, who tragically died 13 days later on July 2, 2020 from injuries sustained in the fire. Leon was a carpenter and construction worker. He managed and maintained apartment complexes and installed pools for a brief time. His main love was the guitar. He was a talented and accomplished player and started playing as a kid with his family as they would sing along. He had once played on the Ted Mack Radio Hour as a kid and placed second place to the famous Brenda Lee. His second passion was collecting horse figurines and photos of horses. He served his country in the U.S. Air Force and was honorably discharged. He is survived by children, Kimberly (Jim) Cicalo, Christine Keller, Sheri Keller, Rosanna Keller, and Scott (April) Keller; grandchildren, Travis and Matthew Keller, Lindsay Neal, Chelsey, Destiney, Tabitha, Carlee, Breanna, and Kaitlyn Keller; and numerous great grandchildren. He is also survived by sisters, Judy, Linda, Carol, Cheryl, Carleta, Cindy, Rosemary, and Darleen. He was preceded in death by an infant grandson, Nathan, and 4 brothers. A memorial service will be held at a later date in Saginaw, Michigan. Memorial contributions are suggested to Rodenberger-Gray Funeral Home 1010 Westmoreland Ave. Napoleon, OH 43545 to help with funeral expenses. Online condolences may be made at www.rodenbergergray.com

The family of Leon C Keller created this Life Tributes page to make it easy to share your memories.

Send flowers to the Keller family.