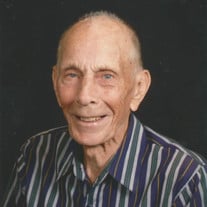 Lee Conn Miller, 90, passed away at his home, surrounded by his family on Thursday, November 5, 2020. He was born in McClure, Ohio to the late Otto F and Mary O (Conn) Miller. He married Arlene Showman on September 5, 1954 at Emmanuel Lutheran Church, Napoleon. He graduated from McClure High School in 1948. Lee was a member of the social club 5H. He served two years in United States Army during the time of the Korean war. Lee took over the family farm raising registered Holsteins after his father was killed in a farming accident. He farmed until the early 1990’s and during that time was a member of the Farm Bureau. After farming Lee went on to work at Walmart for 13 years. Lee enjoyed fishing, golfing, dart ball and gardening. He was known for raising giant oxhart tomatoes, which won multiple awards at the Henry County Fair. Lee was an avid golfer and during one of his outings, he shot a hole in one which made the local newspaper. He was a lifelong member of St. Paul’s Lutheran Church in McClure, Ohio and was also a member of the McClure Legion. He is survived by his loving wife of 66 years, Arlene; children, Kevin (Kim) Miller, Napoleon; Kandy (William) Current, Bowling Green; and Karen (Raymond) Tills, Arlington, TX; grandchildren, Tom (Sarah) Current, Tiffany (Dennis) Bechstein, Allison Miller, Andrew Miller, Logan Tills, Cody Tills, and Tanner Tills; great-grandchildren, Maylee, Malcolm, Oliver, Scarlett; and Sister-in-law Donna Smith. Lee was preceded in death by his parents and siblings, Maxine (Carl) Bockelman; Marilyn (Jim) Smith; Fred (Josephine) Miller; Lois (Lavaughn) Huber; and Keith (Darlene) Miller. Friends and family will be received at Rodenberger-Gray Funeral Home, McClure, on Tuesday, November 10, 2020 from 2:00 PM until 7:00 PM. Funeral Services will be held on Wednesday, November 11, 2020 at 11:00 AM at the Funeral Home with an hour of visitation prior to services. Interment with military honors will be held at Hockman Cemetery. Memorial contributions may be made to St. Paul’s Lutheran Church, McClure, Ohio or Hospice of Northwest Ohio. Online condolences and messages may be shared with the family at rodenbergergray.com.

Lee Conn Miller, 90, passed away at his home, surrounded by his family on Thursday, November 5, 2020. He was born in McClure, Ohio to the late Otto F and Mary O (Conn) Miller. He married Arlene Showman on September 5, 1954 at Emmanuel Lutheran... View Obituary & Service Information

The family of Lee Miller created this Life Tributes page to make it easy to share your memories.

Lee Conn Miller, 90, passed away at his home, surrounded by his...

Send flowers to the Miller family.