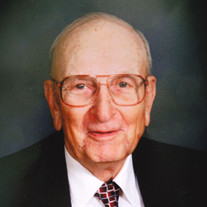 Lawrence F. Langenhop, 94, of Napoleon, Ohio passed away on April 24, 2019. He was born on July 2, 1924 on the family farm in Henry County, Ohio to Adolph and Mary (Cordes) Langenhop. Lawrence was a lifelong resident of Henry County and a lifelong member of St. John Lutheran Church, Freedom Township. On March 11, 1950, he married Ruth Daman at St. John Lutheran Church and she preceded him in death on Sept. 6, 2009. Lawrence spent his life farming with his father and later with his son. He “officially” retired in 1989, although he continued to be the “boss” well after. Lawrence was proudly driving the combine during harvest at the ripe old age of 90. He proudly served his county in the US Army during WWII and was stationed in Japan. He was a member of the Ridgeville Legion Post 454 and Napoleon VFW Post 8218. Lawrence also served his church on the school and cemetery boards; and as a church trustee and elder. Lawrence’s greatest passions were his strong faith in the Lord, his service to his country, his family farming operation, attending countless family sporting events, polka dancing, and watching the Detroit Tigers win or lose. Lawrence is survived by his children, Judy Okuly and Jerry (Lori) Langenhop; grandchildren, Jill (Eric) Vidra; Jason (Megan) Okuly; Callan (Lisa) Langenhop and Laura Langenhop; great-grandchildren, Brooklyn and Bryson Vidra; Brittain Okuly; and Fiona and Archie Langenhop. In addition to his parents, he was preceded in death by his wife, Ruth; grandson, Sammy Okuly; son-in-law, Steve Okuly and sister, Esther Schroeder. The family would like to thank the Napoleon Genacross staff for their dedication, care and compassion during Dad’s stay the past several months. A viewing will be held at St. John Lutheran Church, Freedom Twp. on Saturday, April 27, 2019 from 11:00 AM until the time of the Funeral Service at 1:00 PM. Interment will follow at the St. John Lutheran Cemetery with full military honors accorded by Ridgeville American Legion. In lieu of flowers, memorial contributions may be made to St. John Lutheran Church Endowment Fund, Hospice of Henry County or a charity of your choice. Online messages and condolences may be shared with the family at rodenbergergray.com

Lawrence F. Langenhop, 94, of Napoleon, Ohio passed away on April 24, 2019. He was born on July 2, 1924 on the family farm in Henry County, Ohio to Adolph and Mary (Cordes) Langenhop. Lawrence was a lifelong resident of Henry County and a... View Obituary & Service Information

The family of Lawrence Langenhop created this Life Tributes page to make it easy to share your memories.

Lawrence F. Langenhop, 94, of Napoleon, Ohio passed away on April...

Send flowers to the Langenhop family.