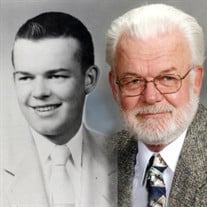 LaVern George “Grizz” Wiemken, age 82, passed away peacefully April 20, 2021, at Defiance Inpatient Hospice. He was born on June 18, 1938, to Henry and Christine (Bindeman) Wiemken in Napoleon, Ohio. LaVern married the love of his life Virginia Ann Wendt on November 27, 1960. They were married for 60 years and had 3 beautiful children. LaVern was a faithful member of St John Lutheran Church Route 6 and 66. His wife and daughter Terri took loving care of him in their home until the last few days of his life. LaVern got his start in farming when he and his family converted the hip-roof barn on their property into a poultry raising operation. The operation grew into a layer house and row crop farming. Together with his late brother LeRoy, they farmed for over 40 years after which LaVern’s son Randy and grandson Ben continued the farming tradition. LaVern was also an avid car collector. He and Virginia collected cars throughout their lives and were members of several car clubs. LaVern’s daughter Kelly and her husband Dave have continued the vintage car hobby. LaVern is survived by his loving wife Virginia Wiemken of Defiance, sister-in-law Patsy Wiemken, sister LaVonne (Ted) Homier, daughter Terri Wiemken of Napoleon, son Randy (Kim) Wiemken of Ridgeville Corners, and daughter Kelly (David) Copeland of Findlay. He also leaves behind 6 grandchildren: Nathan (Marybel) Howard, Rachel Rhodes, Benjamin (Megan) Wiemken, Ethan (Madison) Wiemken, Elizabeth (Tyler) Joseph, Jessica Copeland, and great grandchildren; Zoe, Kaylee, Rylee, Isaiah, Luke, Lilian, and Liam. He was preceded in death by his parents, Henry and Christine Wiemken, and his brother LeRoy. Funeral services will be held at 3 p.m. on Sunday, April 25th, 2021 at St. John Lutheran Church, Route 6 and 66 with visitation from 12:30 p.m. till the time of service. Interment will follow at Bethlehem Lutheran Church Cemetery, Adams Ridge. Memorial contributions are suggested to CHP Hospice or Ridgeville Twp. Volunteer Fire Department. Online condolences may be made at www.rodenbergergray.com

The family of LaVern G. Wiemken created this Life Tributes page to make it easy to share your memories.

Send flowers to the Wiemken family.