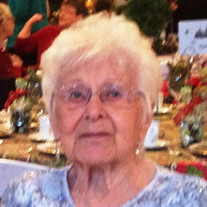 LaMar Lillian Hahn, 99, of Malinta, Ohio, went home to her Heavenly Father on July 10th.She was born on March 27,1921, to Herbert and Ella (Klein) Heckler. LaMar married Franklin Henry Hahn of Hamler on November 1, 1942 at Trinity Lutheran Church, Malinta. LaMar graduated from Malinta-Grelton High School in May of 1939 and completed business school in Lima in 1941. She was an excellent secretary/bookkeeper at many local businesses. She worked at Bill Fetter Real Estate, Napoleon; Carl Williams, Lawyer, Napoleon; Postmaster - Malinta Branch during World War II; Heckler & Sons John Deere Dealership (which her father owned); Campbell's Soup Company in their lab; Northwest Signal newspaper in accounts payable; Monsanto and Landmark, Malinta, along with being a full-time mom. She retired in 1965. She was a life-long member of Trinity Lutheran Church, Malinta, where she served as a Sunday School teacher, officer of the ladies group, flower committee and communion committee. She was always ready to do the Lord's work. During her retirement years she enjoyed reading, playing her keyboard, being a Gray Lady at Henry County Hospital and a Hospice Volunteer. She also assisted at Red Cross Blood Drives and was a part of the SPARK program at the Patrick Henry School District Malinta building. She and Frank loved to travel and made many wonderful friends on their trips in the United States and abroad. LaMar is survived by her daughters LeAnn (Bob) Hall, Napoleon and Lynette (Mike) Hoops, Malinta. She had three much loved grandchildren Andrew (Christi) Hoops, Brighton, Michigan; Timothy (Norma) Hoops, Avon, Ohio and Bethany (Stephen Shuman) Hoops, St. Louis, Missouri. Four great-grandchildren include Ava and Jacob Hoops, Brighton and Paxton and Hudson Hoops, Avon. She was preceded in death by her parents, loving husband Franklin in March, 2004, and sisters Thelma (Shim) Bartels of Bradenton Florida and Marilyn (Mel) Heckler of Defiance. Friends and family will be received at the Rodenberger-Gray Funeral Home, Napoleon on Monday, July 13th from 4-8 p.m. Funeral Services will be held at Trinity Lutheran Church at 11 a.m. on Tuesday with hour of viewing prior to the service. Interment will follow at the Forest Hill Cemetery, Napoleon. Memorial contributions may be made to Trinity Lutheran Church or the donor's choice. Masks will be required for attendance and will be provided by the family for those who do not have one. Online condolences may be made at www.rodenbergergray.com

The family of LaMar Lillian Hahn created this Life Tributes page to make it easy to share your memories.

Send flowers to the Hahn family.