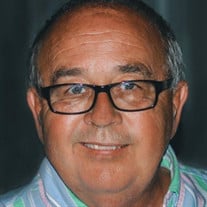 Kenneth E. Neuenschwander, 74, of Napoleon, passed away from multiple health complications on Saturday, October 17, 2020 at the Defiance Area Inpatient Hospice Center. Ken was born on May 26, 1946 to Alverda (Yackee) and Theodore Neuenschwander. He was a graduate of Wauseon High School and earned Bachelor’s and Master’s Degrees from Bowling Green State University. Ken married Charlene O’Hara on June 13, 1970. Ken, Mr. N or "N", was a talented and resourceful leader, a compassionate mentor, a master delegator and an electric personality that definitely made an impact on many lives. He taught high school English, speech, and drama for 36 years. Ken taught communications, acting and theater at Defiance College for several years. As an advisor, he organized many spirited events for the school and community. Ken shared his creativity in directing high school, collegiate, and community theater plays. He often recognized potential in people and fostered confidence and passion for the arts. Although he certainly enjoyed being in charge and dreaming the dream, Ken equally loved performing. He was involved in the Summer Stock at BGSU, Huron Playhouse, a longtime member of the Maumee Valley Civic Theater, contributed to the Fort Defiance Players, and supported the Henry County Arts Partnership and the Napoleon Athletic Boosters. Ken established and developed the Napoleon Community Television (NCTV) program. He spearheaded and gathered the community to erect the Charles Buckenmeyer Stadium. Ken was a member of St. Paul Lutheran Church in Napoleon. He was a passionate and visionary founder of the Napoleon Civic Center. Ken’s modesty for his personal accomplishments and community contributions make it impossible to share a complete list. Most of all, Ken was a committed husband, a supportive father and an extremely proud grandfather. In his retirement, Ken especially loved spending time at the lake with his family and attending his grandkids extracurricular activities. Ken is survived by his wife of 50 years, Charlene (O’Hara) Neuenschwander; children, Amy (Greg) Rosebrook of Napoleon, Jennifer (Troy) Baughman of Dexter, Michigan, and Laura (Brian) Dean of Powell, Ohio; grandchildren, Paige Snyder, Zack Rosebrook, Kendall Rosebrook, Nate Baughman, Molly Rosebrook, Tessa Baughman, Mia Baughman, Mason Dean and Owen Dean; brothers Larry (Ginni) and Brent Neuenschwander of Wauseon. Ken was preceded in death by his parents. Due to the global pandemic, services will be private with immediate family. The funeral service will be livestreamed at 1 p.m. on Saturday, October 24th and can be viewed at https://www.stpaulnapoleon.org Memorials are suggested to Ken’s most recent community passion, the development of the Napoleon Civic Center. Donations can be made online at https://www.gofundme.com/f/napoleon-civic-center-for-kenneth-neuenschwander or mailed to Rodenberger-Gray Funeral Home 1010 Westmoreland Ave. Napoleon, OH 43545.

Kenneth E. Neuenschwander, 74, of Napoleon, passed away from multiple health complications on Saturday, October 17, 2020 at the Defiance Area Inpatient Hospice Center. Ken was born on May 26, 1946 to Alverda (Yackee) and Theodore Neuenschwander.... View Obituary & Service Information

The family of Kenneth Neuenschwander created this Life Tributes page to make it easy to share your memories.

Kenneth E. Neuenschwander, 74, of Napoleon, passed away from...

Send flowers to the Neuenschwander family.