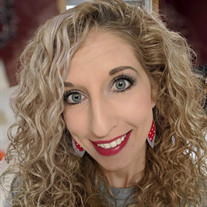 Keli Renee Baker, 36, of Napoleon, Ohio passed away unexpectedly on Tuesday, February 16th, 2021 at St. Luke’s Hospital, Maumee, Ohio. She was born August 5th, 1984 in Napoleon, Ohio to Kevin and Cindy (Bruback) Rippee. On June 7, 2008 she married Sean Baker at St. Augustine Catholic Church, Napoleon, Ohio. Keli was a 2003 graduate of Napoleon High School and 2008 graduate of the University of Akron, where she attained a bachelor’s degree in early childhood development. She was currently finishing her courses to complete her license in Intervention Specialists. Keli worked as a pre-school teacher at Napoleon Elementary schools, the job she loved with all her heart. She previously worked at Head Start, Defiance for several years. Keli was highly active in the school system and was currently serving as President of PTO and the 5th-grade volleyball coach. She also helped coach recreational and travel softball and volleyball. She would be considered the “Super” Mom, as she was involved in every activity concerning her daughters: volunteer swim coach, dance mom, gymnastics, basketball and Maumee valley civic theater which her daughters both participated in. She loved everything Ohio State Buckeyes, Napoleon Athletics and Cleveland Browns. She is survived by her husband, Sean; the two lights of her life, daughters, Abbi and Georgia; parents, Kevin (Cindy) Rippee; siblings, Rochele and Caitlin Rippee, and Jason (Amy) Behlke; father and mother-in-law, Doug (Deb) Baker; several in-laws and nieces and nephews, cousins and her exchange brother and sisters from Germany and Brazil, Neto, Nina and Sorina. A public visitation will be held on Sunday, February 21 from 1-7 p.m. at Rodenberger-Gray Funeral Home, Napoleon. The family requests that you wear your Napoleon Wildcat or Ohio State Buckeye clothing. Masks and social distancing will be required. A private Mass of Christian burial, by invitation only will take place on Monday, February 22nd at St. Augustine Catholic Church, Napoleon, Ohio. The service will be livestreamed on the church’s Facebook page at 11 a.m. IN LIEU OF FLOWERS AND GIFTS, memorials are suggested to “Sean Baker”, which will be used for a future college education fund for Abbi and Georgia or Donate Life America. .

The family of Keli Renee Baker created this Life Tributes page to make it easy to share your memories.

Send flowers to the Baker family.