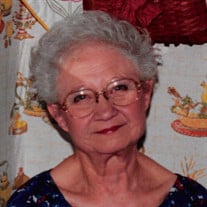 Kathryn “Katy” Otto, 95, of Napoleon, Ohio died peacefully on Saturday, March 30, 2019 at Northcrest Nursing Home, Napoleon, Ohio. She was born April 1, 1923 in Napoleon, Ohio to the late August S. and Stella (Burke) Diemer. On May 28, 1949, she married Charles Otto at St. Augustine Catholic Church, Napoleon and he preceded her in death in February of 1986. Katy was a 1941 NHS Graduate and worked a variety of jobs throughout her career, mostly in the office and secretarial industry. She retired in the early 2000’s from the Hubbard Company. She was an avid gardener and loved to crochet and quilt…. a talent she learned from her mother. She also enjoyed singing and playing cards. Katy is survived by numerous nieces and nephews, which include caregivers, Karen (Ralph) Geil, Joe (Carol) Kolb, and Duane Dunlap. She was also preceded in death by brothers, Wilbur, Alton, Russell, Paul and Howard Diemer; and sisters, Evelyn and Joan Kolb. A Mass of Christian burial will be held at 11 a.m. on Wednesday, April 3 at Sacred Heart Catholic Church, New Bavaria. Interment will follow in the church cemetery. Visitation will be held on Tuesday from 4-8 p.m. at Rodenberger-Gray Funeral Home, Napoleon, Ohio. Memorials are suggested to Sacred Heart Catholic Church, St. Augustine Catholic Church, or Samaritan’s Purse. Online condolences may be made at www.rodenbergergray.com.

The family of Kathryn "Katy" Otto created this Life Tributes page to make it easy to share your memories.

Send flowers to the Otto family.