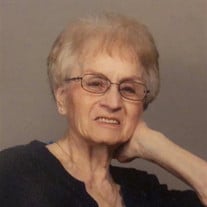 Kathlean Wellman Kieffer Ward, age 89, passed away peacefully on January 4, 2020, at Genacross Lutheran Home, Napoleon, Ohio, surrounded by several of her children. Kathlean was born on November 14, 1930, in Defiance, Ohio to the late George Wellman and Mabel (Hall) Wellman. She was married to Leonard (Bud) Kieffer on January 8, 1950 (deceased August 6, 1973). She then married Arthur J. Ward on June 1, 1974 (deceased July 9, 2003). Kathlean was also preceded in death by her siblings, George Wellman, Ed Wellman, Bruce Wellman, Johnny Wellman, Emerson Wellman, Arlene Miller and Marilean Schwab, and daughter, Sharon (Ward) Potter. She is survived by her last remaining sibling, Betty Jean Mansfield. Kathlean is survived by her children: Gary (Sandi Dale) Kieffer, Debra (Joe) Casebere, Greg (Rita McCreery) Kieffer, Steve (Billie Jo) Ward, Jeff Kieffer, and many nieces and nephews. She will be greatly missed by her 13 grandchildren and 20 great-grand children. Kathlean was a 1949 graduate of Defiance High School. She worked for Chief Super Market in Defiance and Napoleon for 28 years. She was a very successful Avon Lady for over 15 years, winning many awards. She was also a member of Emanuel Lutheran Church in Napoleon, Elks Club, Moose Club, Eagles Club, American Legion, and the VFW. Kathlean's funeral service will be held on Monday, March 2, 2020, 11:00 am, at Emanuel Lutheran Church, 810 Scott Street, Napoleon. Visitation with family will be at the Church from 10:00 – 11:00. All are welcome to attend the luncheon immediately following the service in the church basement. A service with burial of her cremains will be for the family at Riverview Memory Gardens, Defiance, Ohio, at a later time. Kathlean loved all of the staff, residents, programs and services at the home, and was actively involved in everything that was offered. She also enjoyed visiting with and helping all the residents and staff as long as she was able. If you would like to make a memorial in her name, please consider a donation to: Genacross Lutheran Services, Napoleon Campus, Attention: Activities Department, 1036 S. Perry Street, Napoleon, Ohio, 43545

The family of Kathlean Ward created this Life Tributes page to make it easy to share your memories.

Send flowers to the Ward family.