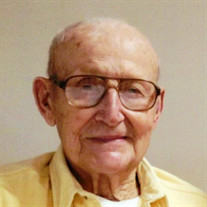 Junior Harmon passed away peacefully at Defiance Area Inpatient Hospice Center on January 25, 2020 surrounded by family. He was born October 29, 1925 in Henry County, the son of Oscar and Lizzie (Kuhlman) Harmon. He was the youngest of 12 children. Junior graduated from Napoleon High School in 1943. During his high school years, he helped his father, Oscar, on the family farm and with the moving business. In 1944 during World War II, Junior was drafted into the US Army and served in the European Theater of Operations. He was in the 99th Infantry Division and saw combat action at the Battle of the Bulge. He was awarded a Purple Heart for injuries suffered during combat. After being discharged in 1946, Junior came home to Napoleon to join the family moving business. On August 20, 1949, Junior married Joan Sworden, and they had three children. They were members of St. Paul Methodist Church. Junior bought Harmon Building Movers from his father in 1957. Junior and Joan went moose hunting and fishing in Canada. Junior also provided band camp equipment transportation for the Napoleon High School band. Joan passed away Nov. 10, 1979. On May 28, 1982, Junior married Elaine (Niebel) Franz. Elaine's family of 4 children joined Junior's family, and together they provided a very loving and thoughtful relationship with each family member. Elaine stepped in and assisted Junior with the moving business. They enjoyed traveling the country to visit many relatives. Junior was dedicated to his moving business providing work for Henry County Historical Society, Henry County Fairboard, Wolcott House and Sauder Museum, along with moving many people's houses and barns in the area. Junior volunteered his time and labor to many local organizations. Many family members and businessmen sought his advice and expert knowledge in providing solutions to various problems. He was Honorary Grand Marshal for the Henry County Tomato Festival parade in 1997. Junior was a member of the American Legion Post 300. Survivors include his children, Gary (Diane) Harmon, Greg (Peggy) Harmon, Darlene (Dan) Grieser, Julia (John) Talks, Cindy Bachman, Lori (Doug) Hall, and Lee (Sheila) Franz. Also surviving are grandchildren Matt (Kate) Harmon, Tiffany (Matt) Small, Drew (Lauren) Harmon, Troy Harmon, Jason Grieser, Alex Talks (Eli Maiman), Stephen Talks, Ryan (Nicki) Bachman, Robyn Bachman Cocke, Amanda (Jarred) Gulley, Sarah Evans, Libbey (Gene) Zinn, Zachary (Ashley) Franz, Taya, Chase, and Chevelle Franz. He is also survived by 23 great-grandchildren. He was preceded in death by his parents, his 11 brothers and sisters, his first wife, Joan, and his second wife, Elaine. Visitation will be held at the Rodenberger-Gray Funeral Home, Napoleon on Thursday, January 30, 2020 from 2:00 pm until 7:00 pm. Funeral Services will be celebrated at the Funeral Home on Friday, January 31, 2020 at 11:00 am with an hour of viewing prior to services. Interment will follow at Forest Hill Cemetery, where military Honors will be accorded by the American Legion Napoleon Post 300. Memorial contributions may be directed to CHP Hospice, Defiance, OH or to the American Legion Bert G. Taylor Post 300. Much wisdom, knowledge, and history was lost with Junior Harmon's passing on Jan. 25, 2020. Online messages and condolences may be shared with the family at rodenbergergray.com.

Junior Harmon passed away peacefully at Defiance Area Inpatient Hospice Center on January 25, 2020 surrounded by family. He was born October 29, 1925 in Henry County, the son of Oscar and Lizzie (Kuhlman) Harmon. He was the youngest of 12 children.... View Obituary & Service Information

The family of Junior Harmon created this Life Tributes page to make it easy to share your memories.

Send flowers to the Harmon family.