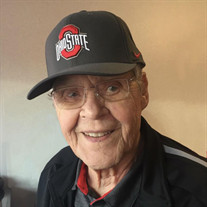 John Harold Eddy, 89, of Napoleon, Ohio passed in peace on June 19, 2020 at the Inpatient Hospice Center in Defiance, Ohio. He was preceded in death by his wife, Bonnie Eddy with whom he enjoyed 64 wonderful years of marriage. He is survived by three children, Cynthia Eddy (Mark Radtke) of West Harrison, Indiana, Constance (Bradley) Holzworth of Dublin, Ohio, and John Paul Eddy (Julie) of Toledo, Ohio; as well as five grandchildren, Lena, Britton, and Jonathan Holzworth and Elizabeth and Victoria Eddy. John was born on March 14, 1931 to Harold and Leona (Toner) Eddy, in Ada, Ohio; where he also attended high school and graduated in 1949. He enlisted in the US Marine Corp. in 1951 and proudly served his country in the Korean War. He was a graduate of Coyne Electronics College and also received an Associate Electrical Engineering Degree form NW State Community College. John enjoyed a successful career as a Journeymen Electrician at Clevite retiring in 1996. He was a lifelong member of the Napoleon American Legion Post #300 as well as the Kenton Lions Club. John was an active member of St. Paul's United Methodist Church in Napoleon where he served on various committees and the Administration Council. John and his wife were actively engaged in the Napoleon community where he volunteered for the Henry County American Cancer Society, Relay for Life, Henry County Flower Show, and the HC Hospital Auxiliary Bazaar. An avid gardener, John's specialty included Roses and Hostas. He was a member of the American Rose Society, the American Hosta Society, and the Black Swamp Hosta and Daylily Society. John loved following his favorite sports teams and especially enjoyed rooting for the Ohio State Buckeyes while at the same time rooting against that ''Team Up North." Friends and family will remember John as a kind, jovial and generous man. He and Bonnie's philanthropic efforts touched many an institution in Napoleon including the Hospital, Senior Center, playground, and emergency services. John's family would like to thank Visiting Angels, the Napoleon Senior Center and his MacDonald's coffee buddies for helping to make his later years happy, comfortable, and fulfilling. A Memorial Gathering will be held at Rodenberger-Gray Funeral Home on Wednesday, July 1 from 1-3PM. The family requests no flowers. Memorials may be made to the Napoleon Senior Center, St. Paul United Methodist Church, or CHP Home Care and Hospice of Defiance. Due to the current health environment surrounding COVID-19, public visitation will be conducted with proper safeguards. Please observe proper social distancing when attending.

John Harold Eddy, 89, of Napoleon, Ohio passed in peace on June 19, 2020 at the Inpatient Hospice Center in Defiance, Ohio. He was preceded in death by his wife, Bonnie Eddy with whom he enjoyed 64 wonderful years of marriage. He is survived... View Obituary & Service Information

The family of John Eddy created this Life Tributes page to make it easy to share your memories.

Send flowers to the Eddy family.