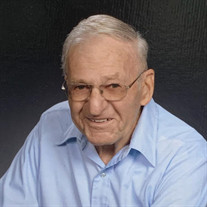 John Damman, 94, of Napoleon, Ohio passed away at his home on Monday, January 24, 2022. He was born in Petersdorf, Romania on March 31, 1927 to Martin and Sophia (Teutsch) Grampes. After the death of his father, his mother remarried and he was adopted in 1932 by William Damman. John married Phyllis Meyer on September 21, 1952, at Peace Lutheran Church, Deshler, Ohio. John was a lifelong member of St. John Lutheran Church, Freedom Township, where he also attended school. John was a active member of the church, who faithfully served in many roles within the church. He proudly served his country in the US Army during WWII and was a member of the American Legion. John served in the 65th Signal Battalion and was stationed in Germany for a year. After the war he started the Gerald Tile company in 1948 with his brother Martin, making concrete drainage tile. In 1966 he became the sole owner of the business which was in business until 1993. John spent the next 22 years as a substitute rural route mail carrier for the United States Postal Service. When he wasn’t working, John enjoyed woodworking and making concrete landscaping pavers, edgings, and flowerpots. His greatest joy was spending time with his family, especially his grandchildren which he would entertain with his harmonica. John is survived by his children, Dennis (Debra) Damman, Sharon (Ed) Hemenway, Dale (Dorinda) Damman; 5 grandchildren; 11 great grandchildren; and sister, Marianne. In addition to his parents, he was preceded in death by his wife, Phyllis; and siblings, Hellen, Fred, Martin, and Franklin. Friends and family will be received at St. John Lutheran Church, Freedom Township, on Friday, January 28, 2022, from 9:30 AM until the time of services at 11:00 AM. Services will be livestreamed from the church website at www.sjl.org. Interment will take place at the church cemetery with military honors accorded by the Ridgeville American Legion and US Army Honor Guard. Memorial contributions may be made to St. John Lutheran Church Endowment Fund or a charity of your choice. Online condolences and messages may be shared with the family at rodenbergergray.com.

John Damman, 94, of Napoleon, Ohio passed away at his home on Monday, January 24, 2022. He was born in Petersdorf, Romania on March 31, 1927 to Martin and Sophia (Teutsch) Grampes. After the death of his father, his mother remarried and he was... View Obituary & Service Information

The family of John Damman created this Life Tributes page to make it easy to share your memories.

John Damman, 94, of Napoleon, Ohio passed away at his home on...

Send flowers to the Damman family.