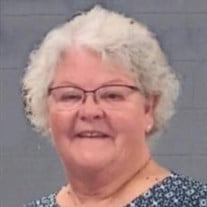 JoAnn Hitts, 70, of Napoleon, Ohio died peacefully on Saturday, January 30, 2021 at Parkview Regional Hospital in Fort Wayne, Indiana surrounded by her family. She was born January 12, 1951 in Toledo, Ohio to the late Richard and June (Swick) Meter. On November 6, 1971 she married Dean Hitts at St. Paul United Methodist Church, Napoleon. JoAnn was a 1969 graduate of Napoleon High School and attained an Associate degree from Penta Community College. She taught several years at Head Start in Defiance. She also worked for Campbell Soup Co. for the tomato pack season, as well as the Napoleon City schools in the cafeteria. After she retired, she spent the past 17 memorable years helping with her grandchildren and running them to activities. She was a member of St. Paul United Methodist Church, Napoleon, where she was active in the women’s groups. She loved doing craft work for the church, holiday’s, grandchildren school events, and 4-H projects. She enjoyed traveling and spent many fun-filled yearly ski trips with her family. She is survived by her husband, Dean; children, Brad Hitts of Toledo, Holly (Greg) Weber of Hamler, Matt Hitts of Columbus; grandchildren, Lauren, Anna, Sarah, and Joel Hitts, and Karly, Karsyn, Kensey, and Kenton Weber; and brothers, Jerry Meter of Pemberville and Donald (Jeanne) Meter of Liberty Center. She was also preceded in death by a brother, Robin. Funeral services will be held at 11 a.m. on Monday, February 8th, 2021 at Rodenberger-Gray Funeral Home, Napoleon. Interment will follow at Forest Hill Cemetery, Napoleon. Visitation will be held on Sunday from 2-6 p.m. at the funeral home. In lieu of flowers, memorials are suggested to St. Paul United Methodist Church. Online condolences may be made at www.rodenbergergray.com.

JoAnn Hitts, 70, of Napoleon, Ohio died peacefully on Saturday, January 30, 2021 at Parkview Regional Hospital in Fort Wayne, Indiana surrounded by her family. She was born January 12, 1951 in Toledo, Ohio to the late Richard and June (Swick)... View Obituary & Service Information

The family of JoAnn Hitts created this Life Tributes page to make it easy to share your memories.

Send flowers to the Hitts family.