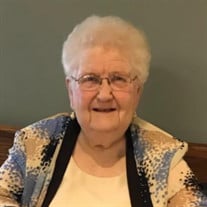 Joann M. Gerken, 87, of Wauseon, Ohio died Tuesday, October 26th, 2021 at Hospice of Northwest Ohio in Toledo surrounded by her daughters. She was born March 6, 1934 in Henry County, Ohio to the late John and Irene (Bostelman) Baden. She was baptized on April 25, 1934, confirmed on May 16, 1948 at Bethlehem Lutheran Church, Okolona and on May 16th, 1954 she married Vernon Gerken at the church and he preceded her in death in February of 2000. Joann was a member of St. Luke Lutheran Church, Wauseon and member of the St. Luke Ladies Guild, where she served as the secretary for many years. She worked for the Fulton County Auditor’s Office as a Deputy Auditor for 25 years. She volunteered at Fulton Manor Nursing Home. She also enjoyed eating out with friends and loved following all her grandchildren and great grandchildren’s activities. She is survived by her 3 daughters, Nancy (Bernard) Yackee and Lynette (Kirby) Smith, both of Wauseon, and Linda (Jeff) Comadoll of Napoleon; a sister, Phyllis (David) Meyer of Napoleon; and brother, Marvin (Patty) Baden of Fruitland Park, Florida; grandchildren, Carrie Van Sickle, Kaci (David) Weirauch, Kayla (Eric) Simon, John Smith, Kelsi Wyper, Jeffrey Smith, Chandra (Randy) Howard, and Ryan Nagel; great grandchildren, Carson, Kowen, Samuel, Kane, Kaleb, Joanna, Braden, Avery, Logan, Kyle, Kailie, and Alivia. She also was preceded in death by a son, Jeffrey. Funeral service will be held on at 11 a.m. Tuesday, November 2, 2021 at St. Luke Lutheran Church, Wauseon, Ohio. Interment will follow in the church cemetery. Visitation will be held on Monday from 2-7 p.m. at Rodenberger-Gray Funeral Home, Napoleon and Tuesday from 10-11 a.m. at the church. The family suggest memorial contributions to St. Luke Lutheran Church or Fulton Manor Nursing Home. Online condolences may be made at www.rodenbergergray.com

Joann M. Gerken, 87, of Wauseon, Ohio died Tuesday, October 26th, 2021 at Hospice of Northwest Ohio in Toledo surrounded by her daughters. She was born March 6, 1934 in Henry County, Ohio to the late John and Irene (Bostelman) Baden. She was... View Obituary & Service Information

The family of Joann M. Gerken created this Life Tributes page to make it easy to share your memories.