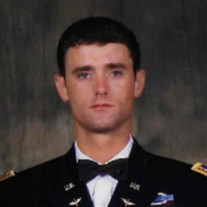 CW3 Jeremy Meyer, 37, of Colorado Springs, Colorado, formerly of Hamler, Ohio died on April 7, 2019 in Bueno Vista, Colorado. Jeremy was born on July 4, 1981 in Toledo, Ohio. Jeremy enlisted in the US Army on November 16, 2000 as an infantryman. He served with the 3rd Infantry Regiment in Washington D.C. as a member of the Old Guard. He was stationed next at Fort Wainwright, AK with the stryker brigade where he deployed to Iraq and earned the Combat Infantryman Badge. Jeremy was accepted into the Warrant Officer Flight Training program in 2007 at Fort Rucker, AL and earned qualification as a Black Hawk (UH-60) pilot in 2009. Upon completion of flight training, Jeremy was assigned to Dustoff, C/7-101st Airborne, Ft. Campbell, KY where he valiantly served as a MEDEVAC pilot in Iraq and Afghanistan, earning the Distinguished Flying Cross for actions during one of several combat rescue missions. His last deployment was with Alpha 4th ID Combat Company Ft. Carson, CO where he deployed to Europe. CW3 Meyer was a valued member of the Army standardization community, instructing and mentoring hundreds of aviators in assignments including the 101st Combat Aviation Brigade, 101st Airborne Division, United States Aviation Center of Excellence and the 4th Combat Aviation Brigade, 4th Infantry Division. He served in roles as Tactical Operations Officer, Instructor Pilot, Instrument Examiner, and Platoon Leader. CW3 Meyer earned the admiration and respect of so many because he was a quiet professional who exuded a humble confidence. His dedication to his profession was infectious to all those with whom he served. CW3 Meyer’s awards include the Distinguished Flying Cross, Meritorious Service Medal, Air Medal with second device, and Army Achievement Medal with four devices, Valorous Unit Award, Combat Infantryman Badge, Combat Action Badge, Expert Infantryman Badge, Senior Army Aviator Badge, Pathfinder Badge and Air Assault Badge. Jeremy loved being outdoors, camping, canoeing, riding his motorcycle or his mountain bike. He also enjoyed bowling and playing corn hole. He could often be found woodworking in his garage, mowing the lawn, and helping friends, family and co-workers work on projects. He loved his dogs, and would help find homes for strays. Jeremy was selfless, always giving back to his country, community, family, friends and co-workers. Jeremy was a member of Hamler American Legion Post 262 He is survived by his Mother, Debra Meyer (Gary Miller) of Columbia, KY; father, Daniel (Lois) Meyer of Sebring, FL; sister, Malinda (Steven) Leitch of Bryan, OH; brother, Matthew Meyer of Napoleon, OH, and nephew, Gage Leitch. He was preceded in death by his maternal grandparents, Cleal and Esther (Medley) Punches, Sr. and paternal grandparents, Raymond and Doretta (Schulze) Meyer. Funeral services for Jeremy will be held on Friday at 11 AM at the Rodenberger-Gray Funeral Home, Napoleon, Ohio, where military honors will be accorded by the United States Army Funeral Detail. Visitation will be held on Thursday from 2-8 PM at the funeral home. Memorial contributions are suggested to Homes For Our Troops, Big Brothers and Big Sisters, and the Humane Society.

CW3 Jeremy Meyer, 37, of Colorado Springs, Colorado, formerly of Hamler, Ohio died on April 7, 2019 in Bueno Vista, Colorado. Jeremy was born on July 4, 1981 in Toledo, Ohio. Jeremy enlisted in the US Army on November 16, 2000 as an infantryman.... View Obituary & Service Information

The family of CW3 Jeremy Meyer created this Life Tributes page to make it easy to share your memories.

Send flowers to the Meyer family.