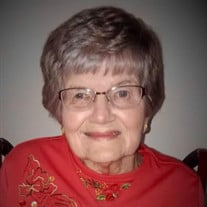 Jeanette Arlene Harms, 89, of Napoleon, Ohio died peacefully on Saturday, December 11, 2021 at Vancrest Nursing Home, Holgate. She was born March 25, 1932 in Napoleon, Ohio to the late Glenn and Vera (Kitter) Frysinger. On April 5, 1953 she married Lloyd Harms at Liberty Chapel Church and he preceded her in death on December 11, 2015. Jeanette was a homemaker and helped her husband on the farm. She also worked at L.S. Dunbar Company and the Sears Catalog Store. She was a member of St. Paul Lutheran Church, Flatrock Twp. She was an avid card player and played in several local card clubs and was a member of the Turkeyfoot Trotters. She also loved to travel and had visited all 50 states and Europe with her husband. She is survived by her daughters, Karen (Jeff Smith) Harms of Napoleon and Becky (Tim) Prigge of Hamler; grandchildren, Kirk and Nathan Williams, Kristin (Adam) Campos, and Kari Prigge; great grandchildren, Carmen and Damien Campos. She was also preceded in death by an infant son, David Lloyd; grandson, Chad Williams; brothers, Doyle, Weldon, Burdette, and Delmar Frysinger; sisters, Dorothy Dunbar and Wylodene Baughman. Funeral services will be held at 11 a.m. on Wednesday, Dec.15th at St. Paul Lutheran Church, Flatrock Twp. Interment will follow in the church cemetery. Visitation will he held on Tuesday from 3-7 p.m. at Rodenberger-Gray Funeral Home and Wednesday from 10-11 a.m. at the church. In lieu of flowers, memorials may be given to St. Paul Lutheran Church, Flatrock Twp. or a charity of the donor’s choice. Online condolences may be made at www.rodenbergergray.com.

The family of Jeanette A. Harms created this Life Tributes page to make it easy to share your memories.

Send flowers to the Harms family.