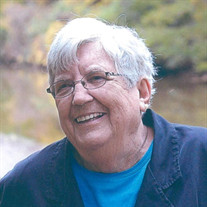 Jean J. Mullholand, 89, of Napoleon, formerly of Liberty Center, went to her heavenly home on September 21st, 2020. She was born November 13, 1930 in York Twp., Fulton County, Ohio to the late Leo and Nellie (Miller) Mock. On June 30, 1950, she married Franklin Mullholand at Colton Methodist Church. Having little money, they went around the town and picked flowers for the wedding bouquets, even having fresh flowers around the wedding cake. Jean and Frank later shared their wedding date with their daughter Sandra, and her husband Ron Foor and then again with granddaughter Ann and her husband Garrett Rettig. Spending 61 years of marriage having 4 children: Sandra (Ron) Foor, Jay (Deb) and Carla (Elmer) Conklin, of Napoleon and David (Jean Reda) of South Daytona, FL; 9 grandchildren, Ann, David Ryan, Christine, Stephany, Shawna, Michael, Lynn, Jenna and Courtney; and 16 great grandchildren, Levi, Elizabeth, Rob, Justin, Alex, Connor, Tyler, Spencer, Brandon, Slayd, Anika, Hayleigh, Holden, Jordan, Braylen and George. Jean was a caring wife, mother, grandmother, and Gigi. Loved to spend time with all her children, grandchildren, and great grandchildren and they were her greatest joy. She was an active member of the Colton United Methodist Church and their Women's society; VFW Wives club, where she held several offices including President, other offices and committee's in these organizations. She held a card club for 10 years at her house every week with about ten ladies, they would bring their children and food and have lunch. She belonged to a quilting group and helped the Colton Church make their famous Easter eggs. She spent winters in Frostproof, FL, with her husband, Frank for several years. And recently for 14 years held a monthly “Cousins card club” at her house for her daughters and nieces "she" being the only Aunt. Jean is preceded in death by her husband Franklin in 2011, and her older siblings, Martha, Lawrence, Clarence, Elva, Johnny, Willard, Glenn, Cecil, Mary, and June, all in heaven where she will be reunited with them again. Funeral services will be held on Friday, September 25th at noon. at Rodenberger-Gray Funeral Home, Napoleon. Interment will follow at Riverview Memory Gardens, Defiance, Ohio. Visitation will be held on Thursday from 4 – 8 p.m. and Friday from 11a.m – noon. In lieu of flowers, memorials may be made to Colton United Methodist Women’s Society.

The family of Jean J. Mullholand created this Life Tributes page to make it easy to share your memories.

Send flowers to the Mullholand family.