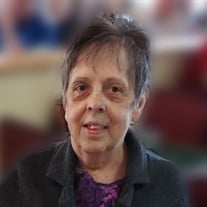 Jane Christine Buenger, 64, of Napoleon, Ohio passed away on July 2, 2019. She was born on September 8, 1954 in Napoleon to Frederick and Laura (Austermiller) Kruse. Jane married the love of her life, Ronald, on April 24, 1976 at St. Paul Lutheran Church Liberty Center and enjoyed 43 years together. Jane worked for 33 years at Northcrest Nursing Home as a STNA. Her selfless, loving personality gave her great enjoyment to take care of other people. She enjoyed spending time with her family, checking in on friends and working along side her coworkers. When relaxing at home, Jane could be found cheering on the Cleveland Browns or Ohio State Buckeyes; or catching up on her favorite reality tv shows. She was an advocate for the 4H Clubs and liked going to the Henry County Fair to watch the 4H judging or getting her favorite fair fries and a milkshake. Jane loved to attend anything her grandchildren were involved in, especially Napoleon football games and watching the Drum Line perform at halftime. She is survived by her husband, Ron; children, Amy (Derek) Meyer, Angela (Alex) Cunningham and honorary son, David Rettig; grandchildren, Benjamin Aschliman Jr., Albert Cunningham, Kruse Cunningham, Silas Cunningham, Lorelei Cunningham, and honorary grandchildren, Eric and Bella Rettig. Also surviving are her sister, Joan Bailey and many nieces and nephews. In addition to her parents, Jane was preceded in death by her son, Daniel Buenger and brother-in-law, David Bailey. Friends and family will be received at the Rodenberger-Gray Funeral Home, Napoleon on Sunday, July 7, 2019 from 2PM until 7PM. Funeral services will be held on Monday, July 8, 2019 at 11AM at the funeral home. Interment will follow at Riverview Cemetery, Defiance. In lieu of flowers, memorial contributions may be directed to the Henry County 4H Endowment. Online messages and condolences may be shared with the family at rodenbergergray.com

Jane Christine Buenger, 64, of Napoleon, Ohio passed away on July 2, 2019. She was born on September 8, 1954 in Napoleon to Frederick and Laura (Austermiller) Kruse. Jane married the love of her life, Ronald, on April 24, 1976 at St. Paul... View Obituary & Service Information

The family of Jane Buenger created this Life Tributes page to make it easy to share your memories.

Jane Christine Buenger, 64, of Napoleon, Ohio passed away on...

Send flowers to the Buenger family.