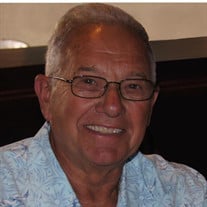 Jan D. Snyder, 85, of Toledo, Ohio, formerly of Holgate, Ohio died Thursday, February 11, 2021 at the Flower Hospital. Jan was born November 19th, 1935 in Holgate to the late Chet and Virginia (Zachrich) Snyder. He graduated from Holgate High school in 1954. Jan was born with a hard work ethic. He helped on the family farm as a child and retired from General Motors after working for more than 30 years. He was a business entrepreneur and created and ran several businesses while working a full-time job at GM. Still after working all those numerous hours, seven days a week, Jan would find time to drive an hour to attend church with his family on Sundays. He was a race car enthusiast and competed in numerous drag races over the years. He loved NASCAR and attended the Daytona 500 for over 50 years. He was an avid boater and was a member of the Bay View Yacht Club and spent his summers at Lost Peninsula Marina, where many people knew him and his boat as Fancy Farmer. It didn’t take much to make Jan happy; from driving his machinery and tackling projects to out-drinking all his friends at Put in Bay, whether it was for work or play it all seemed to fill his cup. Jan’s laugh was contagious and people loved being around him. He had many amazing friendships that carried on with breakfast at diners and one-on-one visits when his fast paced life began to slow down. At last, he cherished the time he spent with his family, spoiling his grandkids, and holding his great grandchildren. He was always checking in on all of his nieces and nephews, always willing to help and give advice to everyone. He was a proud member of St. John’s United Church of Christ, Holgate. He is survived by his children, David (Linda) Snyder and Pamela (Cameron Smith) Sloan; grandchildren, Stacy (Randy) Steel, Kathy (Eric Fenter) Snyder, Ashley (Ryan Lukasik) Sloan, Brandy (Sean) Pawlowski, Cassidy Sloan, and Oliver Smith; numerous great grandchildren, and a sister, Marsha (Randy) Lambert. He was also preceded in death by a sister, Linda Handyside. A private funeral and burial will take place at St. John’s United Church of Christ and Cemetery, Holgate. A public viewing will take place on Friday, February 19th from 3-8 p.m. at Rodenberger-Gray Funeral Home, Napoleon, Ohio. In lieu of flowers, memorials are suggested to the St. John’s UCC Church or St. Jude’s Children Research Hospital.

The family of Jan D. Snyder created this Life Tributes page to make it easy to share your memories.

Send flowers to the Snyder family.