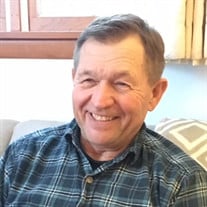 Jan Allan Burkhard of Napoleon, age 72, passed away from cancer on Thursday, May 30, 2019 surrounded by loved ones. He was born in Norfolk, Virginia on March 2, 1947 to the late Dr. Allan Burkhard and Onalee (Stacey) Burkhard. He graduated in 1965 from North High School in Springfield, Ohio. After high school, Jan attended the Ohio State University and graduated in 1969 with a Bachelor’s of Science degree in agricultural economics. He was a life-long farmer who had a knack for improving farming equipment and creating innovative machinery. Jan lived in southwest Iowa for thirteen years, raising hogs, a few cows and other critters, and farming row crops. He moved his farming operation to Henry County in 1989, where he has lived and farmed since, raising mostly corn and soybeans. Additionally, he also worked for ten years for Henry County Soil and Water Conservation District and for the Fulton County commissioners for four years, doing work with ditch maintenance, grant writing, and the county airport. In 1993, Jan married Sandra Wilson. Together they liked riding horses and spending time spoiling their grandkids. For fun, they would travel west and improve their horsemanship skills at working ranches and clinics, as well as helping friends work cattle in Kansas. They were even known to “rob” trains on horseback as part of a southern-Ohio charity event. Jan also had a passion for flying, earning his pilot’s license in the late 1970s, and enjoyed keeping an eye on his crops from the air. He was a hobby model railroader in HO scale and the grandkids loved watching Papa run his trains. Another of Jan’s interests was discussing politics and their implications for agriculture. He was preceded in death by his parents, with his father passing away in March of 2012 and his mother in July of 2014. He is survived by his wife of twenty-five years, Sandra; his two daughters, Onalee (Brian) Pierce and Noreen (Eric) Nichols; four grandchildren, Anson, Clay, Ila, and Edy; his brother Mark, of Port Charlotte, Florida; his sister, Susan (Michael) Noble of Delaware, Ohio; and many cousins, three nephews and one niece. He loved his family fiercely and was always willing to do anything to lend a helping hand—from plumbing emergencies to engineering a shed to babysitting the grand-dogs. In Jan’s memory, the family would like to strongly encourage the farming community to take every precaution when using glyphosphate products: they really are deadly. Family and friends will be received at Rodenberger-Gray funeral home in Napoleon on Saturday, June 8, 2019 from 11am-1pm with a memorial service to follow at 1pm. In Lieu of flowers, the family suggest memorials to the Lymphoma Society PO Box 98018 Washington DC 20090-8018. Online condolences may be made at www.rodenbergergray.com

Jan Allan Burkhard of Napoleon, age 72, passed away from cancer on Thursday, May 30, 2019 surrounded by loved ones. He was born in Norfolk, Virginia on March 2, 1947 to the late Dr. Allan Burkhard and Onalee (Stacey) Burkhard. He graduated in... View Obituary & Service Information

The family of Jan Burkhard created this Life Tributes page to make it easy to share your memories.

Jan Allan Burkhard of Napoleon, age 72, passed away from cancer...

Send flowers to the Burkhard family.