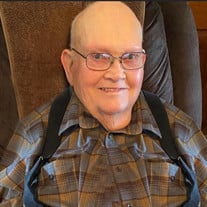 James “Woody” Jones, 84, of Grelton, Ohio passed away on Thursday, December 30, 2021. He was born in Richfield Township, Ohio on March 24, 1937, to Orlo and Leannah (Shuler) Jones. James married Charlotte Travis on April 25, 1959, at the Liberty Chaple in Liberty Center, Ohio. Woody was a lifelong farmer and longtime supporter of Henry County 4H clubs. He also enjoyed being a timekeeper for the Patrick Henry football and basketball teams. Woody served as a former trustee for the Grelton Cemetery and was a founding member of the “Grelton Elevator Coffee Club.” He taught Sunday School and enjoyed puzzles and woodworking. He always attended the grandkid’s school events and delighted in having fun and teasing them. Woody is survived by his wife of 62 years, Charlotte; children, Steve (Anne) Jones, Mark (Penny) Jones, and Craig (Kathy) Jones; grandchildren, Alexander (Jenny) Jones, Luke Jones, Caleb Jones, Lauren Jones, Alayna Jones, Meredith (Derek) Klingshirn, Madeline (Weston) Schwab, Gabriel (Madeline) Jones, and Alexzander Jones; 2 great grandchildren with 3 on the way. Also surviving are brothers, Marvin Jones, Rodney Jones, and Lynn Jones. In addition to his parents, he was preceded in death by his brother Arthur Jones; and sister, Norma Jones. Friends and family will be received at the Rodenberger-Gray Funeral Home, Napoleon, on Wednesday, January 5, 2022, from 2:00 PM until 7:00 PM. Funeral services will be held at Harvest Fellowship Church, on Thursday, January 6, 2022, at 11:00 AM with an hour of visitation prior to services. Interment will take place at Grelton Cemetery. Memorial contributions may be made to the Henry County Transportation Services or the Gideons. Online condolences and messages may be shared with the family at rodenbergergray.com.

The family of James "Woody" Jones created this Life Tributes page to make it easy to share your memories.

Send flowers to the Jones family.