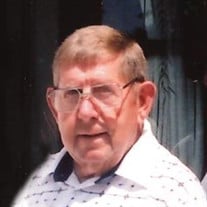 James Julian Dietrich, 90, of Napoleon, Ohio passed away on February 13, 2019. He was born in Napoleon, Ohio on August 19, 1928 to Carl and Mary (Keinath) Dietrich. Jim was baptized and confirmed at St. Paul Lutheran, Napoleon and attended Napoleon High School. He married Mae Dille on July 28, 1948 and proudly served his country in the US Air Force during the Korean War. Upon returning home, he was employed as a truck driver for Tony’s Bakery and later by B&H Trucking before retiring in 1986 from Freightway. Jim was a lifelong member of St. Paul Lutheran, Napoleon and a life member of the Bert G. Taylor American Legion Post #300. He enjoyed traveling and camping with the family. Jim also enjoyed watching NASCAR and working in the garden. He and Mae liked to attend school and sports activities that their sons and grandchildren were involved in. Jim is survived by his wife of 70 years, Mae; sons, Michael (Sandy), Joseph (Angela), and Steven (Kimberly); grandchildren, Robert (Julie), Ryan (Kari), Curtis, Paige (Andrew), Brandee, Kelsey (Ryan), and Makenzie (Jordan Keller); great grandchildren, Beckham, Emma, Megan and Carrie; sister, Mary Lou Eskridge and sister-in-law, Carol Dille. In addition to his parents, he was preceded in death by his step-father, Samuel Ameen; sister, Margaret Kranzlin and brother, Carleton, and infant siblings, Theodore and Colleen. Friends and family will be received at the Rodenberger-Gray Funeral Home, Napoleon on Sunday, February 17, 2019 from 2:00 PM until 6:00 PM. Funeral Services will be held at St. Paul Lutheran Church, Napoleon on Monday, February 18, 2019 at 11:00 AM with viewing staring at 10:00 AM. Interment will follow at Forest Hill Cemetery where military honors will be afforded. Memorial contributions may be made to St. Paul Lutheran Youth Center or Henry County Transportation. Online messages and condolences may be shared at rodenbergergray.com.

James Julian Dietrich, 90, of Napoleon, Ohio passed away on February 13, 2019. He was born in Napoleon, Ohio on August 19, 1928 to Carl and Mary (Keinath) Dietrich. Jim was baptized and confirmed at St. Paul Lutheran, Napoleon and attended... View Obituary & Service Information

The family of James Julian Dietrich created this Life Tributes page to make it easy to share your memories.

James Julian Dietrich, 90, of Napoleon, Ohio passed away on February...

Send flowers to the Dietrich family.