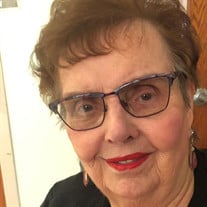 Jacqueline A. (Howe) Sautter, 90, Archbold, formerly Grelton, passed away March 8, 2021 at Fairlawn Haven Nursing Home where she resided since December 2011. Jackie was born October 14, 1930 to Grace E. Pope and Virgil B. Howe in Toledo, Ohio. June 25, 1950, she married Robert W. Sautter who preceded her in death December 5, 2010. She is survived by one daughter, Renee, son-in-law Dan Yoder, Archbold. Grandchildren, Cara (Todd) Sterken of Pettisville and their children, Sophie, Caroline and Gerritt; Steve Desgrange, and daughter, Cailynn; Trent (Beth) Yoder of Wauseon, and Hayden Merillat; brother, Gary Howe cousins, nieces, nephews and many great & great-great nieces and nephews; and, special friend, Harvey Burns. Jackie was preceded in death by both parents, husband, two daughters Shellie and Roxann in infancy, as well as sister-in-law Bonnie Howe. Jackie was a graduate of Malinta-Grelton High School and Bowling Green State University. She did graduate work at New York University and Defiance College. Jackie taught Kindergarten, First Grade and Special Education for 37 years, mainly with the Patrick Henry School System. Following retirement, she substitute taught for another 20 years. Jackie truly loved teaching. As an avid reader herself, one of her greatest joys was teaching children to read. She touched so many children’s lives in her career and many former students kept in touch with visits, phone calls and letters. Jackie was a member of McClure United Methodist Church. Her other memberships included: the DAR, Mayflower Society of Toledo, Malinta American Legion Auxiliary, Life Member of V.F.W. Auxiliary, Life Member of Ohio Retired Teachers, Henry County Retired Teachers, Four Corners Historical Society, Malinta Book Club and numerous other organizations. Jackie was active in the Maumee Civic Theater and enjoyed doing many performances. Her favorites were Fiddler On the Roof and The Wizard of Oz. She was also very interested in local and national politics. Jackie loved her family and spending time with each of them. She and Bob enjoyed attending their three grandchildren’s sporting events and school activities over the years. Jackie lived a very full life and will be greatly missed, but our sadness is softened by our wonderful memories. Honoring her last wishes, Jackie’s body was donated to The University of Toledo College of Medicine Anatomical Donation Program. No services will be held. Burial will be at a later date at Grelton Cemetery. Arrangements are under the care and direction of Rodenberger-Grey Funeral Home, Napoleon, Ohio. The family requests that those planning an expression of sympathy consider McClure United Methodist Church or Sara’s Garden.

The family of Jacqueline (Howe) Sautter created this Life Tributes page to make it easy to share your memories.

Send flowers to the Sautter family.