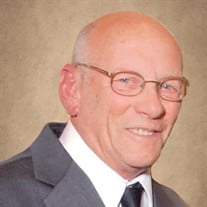 Harry T. “Abe” Tussinger, 82, of Liberty Center, Ohio went home to be with his wife, his” rock”, Marjorie L. “Marge “ Tussinger (D: January 13, 2021) on January 23, 2021 at St. Vincent Mercy Medical Center. The 10 days between Abe and Marge’s death was the longest time they spent apart in their 51 years of marriage. They were married on November 28,1969. They met at Teneco, where they worked for many, many years until their retirement. Abe and Marge shared many interests together- cheering on the Liberty Center Tigers and the Ohio State Buckeyes. Many days were spent fishing on Lake Erie and watching their grandchildren and great grandchildren grow. Abe was a self taught master woodworker. He built beautiful furniture and gifts for those he loved. Abe is survived by his children Tammy (Bobby) Franz, Beth (Robert) DeLeon, Glenda (Steven) Kampton; step-children Jim (Deb) Bodenbender, Cheryl (Greg) Beck, Mike (Janet) Bodenbender, Todd (Kelly) Bodenbender, and Terry (Teresa) Bodenbender; brothers Donald and Harold Tussinger, David Smith, and John Fausnaught and sister Rosemary Ochoa. Abe and Marge had 25 grandchildren and 36 great grandchildren. Abe was preceded in death by a son, Todd Tussinger; a step-daughter Kathy (Bodenbender) Rutter; a sister Shirley Zernhel and great grandchildren, Faith, Grace, and Thomas Gerken A public visitation will be held on Tuesday, January 26, 2021 from 3-7 p.m. at Rodenberger-Gray Funeral Home, Napoleon. A private funeral service will be held on Wednesday at the funeral home. A Public Graveside service will be held on Wednesday at 12:30 p.m. at Hoy Cemetery, located close to corner of State Route 6 and State Route 109. Masks and social distancing will be observed. In lieu of flowers, memorial contributions are suggested to St. Jude’s Children Hospital, Shriner’s Hospital, or the Liberty Center Athletic Boosters. Online condolences may be made at www.rodenbergergray.com.

The family of Harry "Abe" Tussinger created this Life Tributes page to make it easy to share your memories.

Send flowers to the Tussinger family.