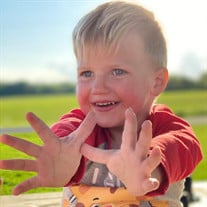 Greyden Jack Wells, known to all who loved him as “G-Man” gained his heavenly wings on Thursday, June 11th after a courageous battle with pediatric cancer. His final days were spent surrounded by the people that he had touched throughout his short, but meaningful life. Greyden’s life, though all too short, gave meaning and brought love to those that had spent even a moment with him. His huge smile and bright blue eyes would melt the hearts of everyone he met. Greyden had a large personality and lived his life in the same way that he ate his favorite foods, by cramming as much in as he could. Though only 2 and ½ years old, he already knew his entire alphabet, could count to 40, and loved to drink pop and coffee. He also loved anything with wheels, from playing with his many toy cars, to riding on tractors with his papa and uncle Kirt on the family farm. He was especially captivated by “excamators”, motorcycles, and buses. He sang wheels on the bus at least three times a day, and somehow would convince everyone and anyone to join along and invent new verses by naming new and unusual things/people that were on the bus. Greyden was the epitome of a fighter. Despite being diagnosed at 9 months old, and going through numerous treatments, his spirit was never broken. He was always smiling and surprising doctors with his spirit of joyfulness. He lived and played and loved his family with a fierceness that couldn’t be matched. Greyden reminded us, with the lyrics to his “jam”, that life is “right here, don’t waste it. You better not. You better not.” He will forever be loved and cherished by his mothers, Beth and Jackie Wells; siblings, B. and Noah Taylor; host brother and best friend, Niladri Aich; grandparents, Jack & Kathy Wells, Scott & Kim Helberg, Randall & Deborah Gross; great grandparents, Jerry & Barbara Johnston, as well numerous aunts, uncles, and cousins. A memorial gathering will be held on Wednesday, June 17th from 5-8 p.m. at Rodenberger-Gray Funeral Home, Napoleon. A celebration of life service will be held at 6 p.m. on Thursday at the funeral home. People are encouraged to attend in casual attire, including their “Greyden Strong” shirts. Memorial contributions can be made to Rodenberger-Gray funeral home. Donations will be gathered, and the proceeds will be sent to Kellogg Eye Center for future Retinoblastoma research in honor of Greyden.

Greyden Jack Wells, known to all who loved him as &#8220;G-Man&#8221; gained his heavenly wings on Thursday, June 11th after a courageous battle with pediatric cancer. His final days were spent surrounded by the people that he had touched throughout... View Obituary & Service Information

The family of Greyden Wells created this Life Tributes page to make it easy to share your memories.

Greyden Jack Wells, known to all who loved him as “G-Man” gained...

Send flowers to the Wells family.