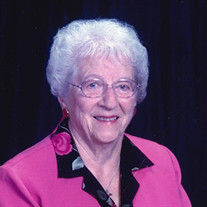 Geraldine “Geri” M. Haase, 99, of Napoleon, Ohio died peacefully on December 6, 2019 at Alpine Village, Napoleon, Ohio surrounded by her family. She was born March 26, 1920 in Holgate, Ohio to the late Albert and Rosina M. (Zachrich) Groll. On June 23,1937 she married Lawrence R. Haase in Lima, Ohio and he preceded her in death on June 27, 2000. Geri was the secretary and bookkeeper for L.R. Haase Oil Co., operated by her husband for many years. She also had worked as a receptionist for the Napoleon Chamber of Commerce. She was a faithful and active member of St. Paul Lutheran Church, Napoleon, where she taught Sunday school, sang in the choir for 50 years, and served as former president to the Mission Society/LWML. She volunteered for the United Way, Red Cross, and other various charities. She was a member of the Henry County Republican Women and worked as a poll worker for over 40 years. She is survived by a son, Kenneth (Lois) Haase of Napoleon; daughters, Patricia (David) Shoemaker of Sonora, CA, Karen (John) Haase-Herrick of Edmonds, WA, and Peggy Haase of Tracy, CA; grandchildren, Micki (Mike) Shepard, Kim (Jeff) Moeller, Sheri McCarley, Jeff (Alicia) Haase, Cyndi (Ted) Shroyer, Rachel (Matt) Stanek, Gretchen Beddingfield, Heidi (Mike) Kleinhans; and great grandchildren, Tyler, Marissa, Zachary, Rachel, Natalie, Aubrey, Averie, Phil and Sofia. She was also preceded in death by sisters, Alameda Eitzman, Vera Bern, Martha Hoff, Ruth Weiss; and a brother, Arnold Groll. Funeral services will be held at 11 a.m. on Thursday, December 12, 2019 at St. Paul Lutheran Church, Napoleon. Interment will follow at Forest Hill Cemetery. Visitation will be held on Wednesday from 3-7 p.m. at Rodenberger-Gray Funeral Home, Napoleon and Thursday from 10-11 a.m. at the church. Memorial contributions are suggested to St. Paul Lutheran Church, Alpine Village, or Grace Hospice. Online condolences may be made at www.rodenbergergray.com

The family of Geraldine "Geri" Haase created this Life Tributes page to make it easy to share your memories.

Send flowers to the Haase family.