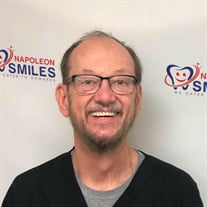 George’s heart, well heart(s), both the original and new, were always too big for him. But that didn’t matter. He always found a way to give generously, and he fought vigorously for that privilege even up to the last moment of his life. George Stephen Cochran was born on Mother’s Day, May 14, 1950 and he died on Mother’s Day, May 10, 2020. Despite his happenstance birth and death, he was not a man that believed in living his life through chance or coincidence. He was a dynamic, intellectual, pragmatic man who created a life by making decisions driven by love. Love for his family, love for his wife, love for his community, love for his patients, and of course, his love for THE Ohio State Buckeyes. He was always a fighter for the things he loved. As a ’74 graduate from THE Ohio State University College of Dentistry, he was able to obtain both his undergraduate degree and his Doctorate in Dentistry in seven years. He then moved back to his hometown, Napoleon, Ohio, to practice with his brother and eventually opened his own office, serving as a life-long dentist for 40+ years. Most people who knew George only knew a small piece of him. To some, he was an avid blanket lover who enjoyed a two slice bologna sandwich accompanied by a two hour nap. To others, he was their childhood dentist who used way too many ornate family photos to decorate his office. He had a way of talking (a lot), that made you feel important because no one was ever a stranger to him. His door was always open, and he was always willing to find a way to help. We are each fortunate enough to only have known a part of this man. He was kind and he was generous. He touched a lot of lives in the community. So if you decide it prudent to mourn this man, do so for you and loved ones – George, however, would prefer you focus your energy on celebrating his life and the times he spent with his beloved family and friends. He lived a life that proved that love does not make things easier, it just makes them worth fighting for. So, go fight for the things you love! Married February 25, 2006 to Nicki Cochran. Survived by his 12 grandchildren and 12 children: Natasha (Hector) Cruz, Nicole (Jim Roberts), Alix (Matt Arvan), Anthony (Melanie Myles), Ashley (Jason Rathburn), Nicholas, Aimee, Austin Nguyen, Micalia, Bo, Mia, and Bentley. As well as 2 siblings: CP (Donna), Phil (Barb), and brother-in-law: Dick Mengerink. Reunited with his parents: Robert and Corinne Cochran, sister: Mary Lou Mengerink, nephews: Jeff Mengerink and Michael Cochran, and many other loved ones. The family will be planning a public Memorial Service in loving memory of George in the following months. Details still to be determined. To sustain George's love for further education, memorials are suggested to the Bentley Cochran Education Fund and can be sent to Rodenberger-Gray Funeral Home 1010 Westmoreland Ave. Napoleon, OH 43545. Online condolences may be made at www.rodenbergergray.com. UPDATE: A Celebration of the Life of George Cochran will be held on June 27, 2020 from 4:00 PM until 8:00 PM at the family home. We would like to take some time to honor the life of George by coming together to share faith and memories within the community. Feel free to wear your best OSU gear! For more details visit: https://georgecochranmemorial.eventcreate.com

George&#8217;s heart, well heart(s), both the original and new, were always too big for him. But that didn&#8217;t matter. He always found a way to give generously, and he fought vigorously for that privilege even up to the last moment of his... View Obituary & Service Information

The family of George S. Cochran created this Life Tributes page to make it easy to share your memories.

George’s heart, well heart(s), both the original and new, were...

Send flowers to the Cochran family.