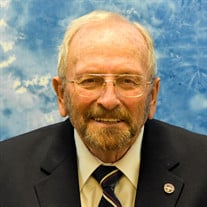 PLEASE NOTE: Due to recent health concerns, the family and church has determined that the funeral service will be not be open to public. A memorial service, date unknown, will be held in the future to allow all the opportunity to attend. Thanks for your understanding. Gene Giffey, 86, of Ridgeville Corners, Ohio died Friday, March 13, 2020 at University of Medical College, Toledo, Ohio. He was born on his family farm in Holgate on December 13, 1933 to the late Arthur and Emma (Yungman) Giffey. As a child, Gene helped on the farm and after graduating from Holgate Highschool he enlisted in the United States Army during the Korean War. Upon his discharge, he met and married Elaine (Bunke) Giffey on February 22, 1959. In the 70’s they moved to Ridgeville Corners and Gene worked for ANR Pipelines for many years until he retired. They are survived by daughters, Lynette (Mike) Grooms of Ridgeville Corners and Linda (David) Volkman of Napoleon. Grandchildren; Chad Grooms (Dawn), Tony (Jenna) Grooms, Christie (Kyle) Cohrs, Matthew Volkman, and Suzy Volkman; great grandchildren, Addisyn, Olivia, Mason, Miller, Casey, Kara, and Caleb. Elaine died in August of 1992. Gene then met and married Donna (Schnitkey) Giffey on November 5, 1994. Donna’s children are Val (Fred) DeGroff of Archbold, Vicki (Steve) Rockey of Edon, Valinda (Jim) Christopher of Linden, MI, and Brian (Tobi) Ziegler of Archbold. 14 step grandchildren and 9 step great grandchildren. Donna died in February of 2015. He is also survived by a brother, Ned (Norma) Giffey of Napoleon and was also preceded in death by siblings, Corinne March, Carmen Wiechers, and an infant sister, Carrol Jean Giffey. Gene’s love was song! He loved to sing and belonged to the Northwesternaires Barbershop Chorus for over 50 years. He also sang in many quartets throughout the years. He enjoyed showing off his Replica Model T Buggy and Antique Tractors around Ridgeville Corners and at the Henry County Fair. He was a faithful member of Zion Lutheran Church, Ridgeville Corners. Visitation will be held on Tuesday from 2-8 p.m. at Rodenberger-Gray Funeral Home, Napoleon. In lieu of flowers and gifts, memorial contributions are suggested to Zion Lutheran Church or Ridgeville Corners Fire Department.

PLEASE NOTE: Due to recent health concerns, the family and church has determined that the funeral service will be not be open to public. A memorial service, date unknown, will be held in the future to allow all the opportunity to attend. Thanks... View Obituary & Service Information

The family of Gene Giffey created this Life Tributes page to make it easy to share your memories.

PLEASE NOTE: Due to recent health concerns, the family and church...

Send flowers to the Giffey family.