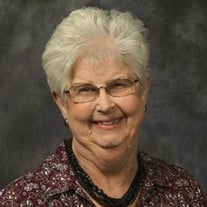 Florence Arlene Dammann Jones, 85, of Napoleon, Ohio died Saturday, April 16, 2022, at the Fulton Manor in Wauseon. She was born September 20, 1936, in Napoleon Township to the late William and Alvina (Rosebrock) Rickenberg. On May 28, 1955, she married Kenneth W. Dammann in Napoleon Township, who preceded her in death on August 16, 1995. Florence is survived by her children, Doug (Peg) Dammann of Napoleon, Sandi Walker of Ridgeville Corners, Linda (Steve) Miller of Napoleon, and Patti (Brent) Badenhop of Hamler; 11 grandchildren and 21 great grandchildren. She was preceded in death by one great granddaughter, Madi Dammann; and her 4 brothers, Leo, Raymond, Elmer, and William Jr. On September 8, 2001, Florence married Arthur (Casey) Jones, who preceded her in death on September 7, 2013. Casey’s children include, Dennis (Su) Jones of Napoleon, Deborah (Ted) Guelde of Deshler and Dee (Rodney) Fackler of McClure; 9 grandchildren and 13 great grandchildren. Florence was a faithful member of St. John Lutheran Church Freedom Township and was a member of the Lutheran Women’s Missionary League where she served as Treasurer and Christian Growth Chairman. Florence enjoyed preparing food for others and as a diabetic, could find some delicious sugar free recipes to serve at special occasions. She also volunteered at the Henry County Hospital for several years Friends and family will be received at the Rodenberger-Gray Funeral Home, Napoleon on Wednesday, April 20, 2022, from 3:00 PM until 7:00 PM. Funeral services will be held at St. John Lutheran Church Freedom Township, on Thursday, April 21, 2022 at 11:00 AM with an hour of visitation prior to services. Memorial contributions may be made to St. John Lutheran Church Freedom Township, The Diabetes Association or to a charity of your choice. Online messages and condolences may be shared with the family at rodenbergergray.com.

Florence Arlene Dammann Jones, 85, of Napoleon, Ohio died Saturday, April 16, 2022, at the Fulton Manor in Wauseon. She was born September 20, 1936, in Napoleon Township to the late William and Alvina (Rosebrock) Rickenberg. On May 28, 1955,... View Obituary & Service Information

The family of Florence Arlene Dammann Jones created this Life Tributes page to make it easy to share your memories.