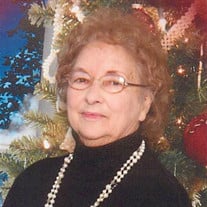 Evelyn “Peg” Vance, 83, of McClure, Ohio died Thursday, August 8th, 2019 at Northcrest Nursing Home, Napoleon, Ohio. She was born March 1, 1936 in DeRidder, Louisiana to the late Patrick and Addy Brister. On June 28, 1952, she married Raymond Vance and he preceded her in death on November 25, 1998. Peg was a homemaker and helped her husband with the gas station and auto repair shop in McClure many years ago. She was an excellent cook and was always known for making way too much food. She is survived by her children, Gary (Mary) Vance of Napoleon and Cindy Parks of McClure; grandchildren, Kelly Strata, Matthew Parks, and Ciara Parks; great grandchildren, Jake and Maddie Strata and Adisynn, Brayden, and Brecken Parks; and a special friend, Rollie Ruskey. She was also preceded in death by grandchildren, Adam and Amanda Vance, and 11 brothers and sisters. Visitation will be held on Tuesday, August 13 from 11-12 p.m. at Rodenberger-Gray Funeral Home, McClure with a graveside service at 12 p.m. at Hockman Cemetery, McClure. Memorial contributions are suggested to a charity of the donor’s choice. Online condolences may be made at www.rodenbergergray.com

The family of Evelyn "Peg" Vance created this Life Tributes page to make it easy to share your memories.

Send flowers to the Vance family.