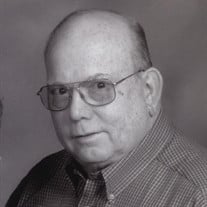 Eugene Raymond Bankey, 83, of Napoleon, Ohio passed away peacefully on Friday, November 20, 2020 at CHP Defiance Area Inpatient Hospice with his family by his side. Gene was born October 19, 1937 in Woodville, Ohio to the late Gilbert and Gertrude (Myers) Bankey. He was a 1956 graduate of Napoleon High School. He married Karen Rettig on June 8, 1957. Gene is survived by his wife, Karen; children, Deb Bankey of Toledo, Jeff Bankey of Toledo, Pam (Gary) Rutenbar of Sault Sainte Marie, MI, and Kirk (Cara) Bankey of Swanton; grandchildren, Chandler, Keegan, Andy, and Jayden; sisters, Donna Burdue and Judy Gibson; and brothers, Jim Bankey, Richard Bankey, and Robert Travis. He was also preceded in death by a granddaughter, Brittany; and siblings, Beatrice Wolf, Helen Watkins, Marion “Red” Bankey, and John Bankey. Right out of high school, Gene started work for Mel Lanzer Construction for a short period and then worked as a mechanic at Snyder Chevrolet. He eventually became the Tow Truck driver and mechanic until he was disabled in 1982. He enjoyed traveling to remote locations to help stranded drivers. When he was able, he enjoyed golfing, bowling, hunting, fishing, Friday night football, and camping with family and friends. As he aged, he liked tinkering in his shop on woodworking projects, watching NASCAR, rooting for the Chicago Cubs, and mowing the yard and plowing snow for the neighborhood on his “Dear John”, his John Deere tractor. Through the years he liked traveling to the U.P., dining out, and especially spending time with his grandsons. If you knew Gene, you knew he could be ornery and expect to hear an answer to a question with “I don’t know….I don’t care…and I don’t give a (blank)!” A public viewing will be held on Wednesday, November 25, 2020 from 3-7 p.m. at the Rodenberger-Gray Funeral Home, Napoleon. Masks and social distancing will be observed. In lieu of flowers, memorials can be made to CHP Hospice or Napoleon Fireman’s Association. Online condolences may be made at www.rodenbergergray.com.

Eugene Raymond Bankey, 83, of Napoleon, Ohio passed away peacefully on Friday, November 20, 2020 at CHP Defiance Area Inpatient Hospice with his family by his side. Gene was born October 19, 1937 in Woodville, Ohio to the late Gilbert and Gertrude... View Obituary & Service Information

The family of Eugene Raymond Bankey created this Life Tributes page to make it easy to share your memories.

Send flowers to the Bankey family.