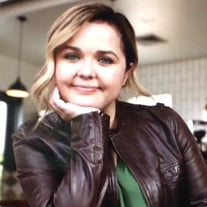 Emily Ruth Jackson, 22, of Napoleon, Ohio died Sunday, June 2, 2019 at the Cleveland Clinic after a life-long battle with Cystic Fibrosis. Emily was born November 5, 1996 in Toledo, Ohio to Patrick Jackson and Sarah (Schlade) Jackson. Emily should have been the poster child for contentment. No matter what new medication she had to take or treatment she endured, she always had a smile on her face. She would not let her condition determine who she was as an individual or person. She was an advocate of Cystic Fibrosis research and was the 2018 ambassador for the Toledo “Great Strides” walk to benefit Cystic Fibrosis. Emily was a 2015 graduate of Napoleon High School and a 2018 graduate of the University of Toledo College of Nursing, where she graduated Cum Laude in an accelerated coarse load. She was a member of Delta Phi Epsilon and the Student Nurses’ Association, serving terms as both President and Fundraising Chair. She was a life-long member of St. Paul Lutheran Church, Napoleon and an active member of the St. Paul Youth Group. Emily attained her dream of becoming a registered nurse and helping others, though only for a brief time, at the Filling Home of Mercy of Napoleon. Emily is survived by her mother, Sarah Jackson of Napoleon; father, Patrick “PJ” (Veronica) Jackson of Midlothian, Virginia; sister, Alyssa Jackson; brother, Robbie Jackson; step-sister, Jennifer Lopez; maternal grandmother, Janice Schlade of Napoleon; paternal grandparents, Robert (Sandy) Jackson of Coldwater, Michigan; and boyfriend, Nick Myers of Wapakoneta. She was preceded in death by her maternal grandfather, David Schlade; and uncle, Kurt Schlade. Funeral services will be held Friday, June 7th at 2 p.m. at St. Paul Lutheran Church, Napoleon. Interment will follow at Glenwood Cemetery. Visitation will be held on Thursday from 2-8 p.m. at Rodenberger-Gray Funeral Home, Napoleon and Friday from 1-2 p.m. at the church. In lieu of flowers and gifts, the family request that memorials be given to St. Paul Lutheran Church, Napoleon Filling Home of Mercy, or to “The Family of Emily Jackson” so Emily can fulfill her wishes of assisting her sister, Alyssa’s future education. The COTA Benefit in Honor and in Celebration of Emily Ruth will still be held on Sunday, June 9th at the Napoleon American Legion on Glenwood Ave. from 11:30 am to 4:00 pm. Online condolences may be made at www.rodenbergergray.com.

The family of Emily Jackson created this Life Tributes page to make it easy to share your memories.

Send flowers to the Jackson family.