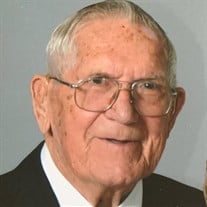 Eldor Cordes, age 87 of Napoleon, died on Sunday, September 22, 2019. At the time of his passing he was at Defiance Inpatient Hospice Center. Born on February 16, 1932 in Adams Twp. – Defiance County, Eldor was the son of the late Fred and Emilie (Hurst) Cordes. On November 7, 1954 he married Fern Moll at St. Paul’s Lutheran Church, Napoleon Township. Eldor was a lifetime member of St. Paul’s Lutheran Church, Napoleon Twp., where he was a former deacon. Eldor was a member of Napoleon American Legion Post # and Napoleon VFW Post #8218 where he was serving as a trustee. He served in the United States Army in Korea from 1952 to 1954. Eldor was employed in the maintenance department of Campbell Soup Company for 36 years, retiring in 1993. He maintained his rental properties in Wauseon and Napoleon for over 50 years. Eldor and his wife enjoyed dancing at the Bavarian Haus in Deshler and traveling to Florida and Europe. He liked entertaining friends and family at his cottage on Round Lake in Michigan. He also loved to watch his grandchildren’s sports activities. He is survived by Fern, his loving wife of 64 years, and daughter, Deb (Marc) Jump, grandchildren, Emilie and AJ Jump of Sylvania, Ohio. A brother, Harold (Irene) Cordes, sisters-in-law, Anita Cordes and Betty Steffel along with many nieces and nephews. Eldor was preceded in death by his parents, sisters Laura Meyer, Minnie Meineke, Tillie Hoffman and brothers Edwin and Alfred Cordes and several nieces and nephews. Funeral services will be held on Wednesday, September 25 at 11:00am at St. Paul’s Lutheran Napoleon Township at Q-1 and Rd. 17. Interment will follow at the church cemetery, where military honors will be conducted by the Napoleon Joint Veteran Posts. Visitation will be held on Tuesday, September 24 from 2pm to 8pm at the Rodenberger-Gray Funeral Home in Napoleon and 1 hour prior to the funeral at the church. In lieu of flowers, memorials are suggested to St. Paul’s Luther Church Napoleon Twp. Memorial Fund or CHP Defiance Inpatient Hospice Center.

Eldor Cordes, age 87 of Napoleon, died on Sunday, September 22, 2019. At the time of his passing he was at Defiance Inpatient Hospice Center. Born on February 16, 1932 in Adams Twp. &#8211; Defiance County, Eldor was the son of the late Fred... View Obituary & Service Information

The family of Eldor Cordes created this Life Tributes page to make it easy to share your memories.