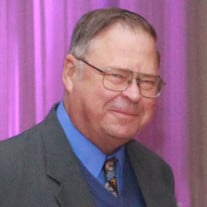 Eldon Harold Huber, 69, Malinta, died Dec. 2, 2018, at Henry Ford Hospital, Detroit, Mich., after a short illness. He was born July 21, 1949, in Defiance, the son of Harold and Emma (Imbrock) Huber. A 1967 graduate of Malinta-Grelton High School, Eldon earned an associate degree in drafting and design from ITT Institute, Dayton, in 1969. He worked for a number of years at Pastor & Beilharz Architects, Defiance. He was also an inspector for the city of Napoleon for several years. Eldon and his father loved farming, and he took over the family farm after his father died in 2001. Eldon was a farmer until the day he died. Eldon is survived by his siblings, Richard (Judy), Fort Wayne, Ind.; Eileen, Indianapolis, Ind.; Marvin, Hamler; and Mary, Archbold; nine nieces and nephews; and six great-nieces and -nephews with one on the way. He was preceded in death by his parents. Visitation will be held from 2-8 pm, Thursday, Dec. 6, 2018 at Rodenberger Funeral Home, Napoleon, and one hour prior to the funeral service at the church. Funeral services will be held at 11 am, Friday, Dec. 7, at Immanual Lutheran Church, St. Rt. 109, Hamler. Interment will follow in the church cemetery. In lieu of flowers, memorial contributions may be made to the church, the Ronald McDonald House, or a charity of the donor's choice. Memories and messages for the family may be shared at rodenbergerfuneralhome.com.

The family of Eldon Huber created this Life Tributes page to make it easy to share your memories.

Send flowers to the Huber family.