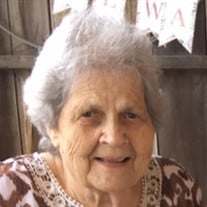 Elaine Harmon passed away peacefully at Henry County Hospital on December 24, 2019. She was born February 14, 1933, in Henry County, the daughter of Paul W. and Audrey (Connin) Niebel. Elaine graduated with honors from Napoleon High School in 1950 and participated in symphony and marching bands and was drum majorette her senior year. She was the coordinator of her class reunions for many years. On August 13, 1950, she married Franklyn (Bud) Franz and they had four children; Julia, Cindy, Lori and Lee. On May 28, 1982, she married Junior Harmon and became a step-mother to Gary, Greg and Darlene Harmon. She was employed by Campbell Soup Company for over thirty-one years in the shipping and warehouse department. After her retirement she also worked at Alpine Village Assisted Living. Throughout her marriage to Junior she also assisted in the family business, Harmon Building Movers. She was a member of St. Paul's United Methodist Church, a former member of St. John's United Church of Christ, Holgate, where she taught Sunday School and was the Children's choir director for several years. For over 63 years she was a member of the Ohio Eastern Star and served as a Worthy Matron of her chapter and a District 7 President. Elaine loved her family and lived a life helping others, especially the elderly. She enjoyed gardening, sewing and collecting antiques. She truly enjoyed spending time at their cottage on Lime Lake, Michigan and watching the grandchildren enjoy the lake activities. She took pleasure in attending many school and sporting activities in which the grandchildren and great grandchildren were participating. Survivors include her husband, Junior Harmon, her children and step-children Julia (John) Talks of Westerville, Cindy Bachman, Lori (Doug) Hall, Lee (Sheila) Franz all of Napoleon, Gary (Diane) Harmon of Napoleon, Greg (Peggy) Harmon of Perrysburg and Darlene (Dan) Grieser of Reno, NV. Also surviving are grandchildren and step-grandchildren Alex Talks (Eli Maiman) of Cincinnati, Stephen Talks, Detroit, Ryan (Niki) Bachman, Napoleon, Robyn Bachman Cocke of Elida, Amanda (Jarred) Gulley, Toledo, Sarah Evans, Napoleon, Libbey (Gene) Zinn, Liberty Center, Zachary (Ashley) Franz, Wauseon, Taya, Chase and Chevelle Franz of Napoleon, Matt (Kate) Harmon of Warsaw, IN, . Tiffany (Matt) Small, Napoleon, Drew (Lauren) Harmon, Cincinnati, Troy Harmon, Columbus, and Jason Grieser, Reno, NV She is also survived by twenty-three great grandchildren and step-great grandchildren. She was preceded in death by her parents, her sister Betty Jane McCormack and her brother Paul W. (Bill) Niebel, Jr. Visitation will be held at Rodenberger-Gray Funeral Home, Napoleon on Monday, December 30, 2019 from 2:00 pm until 7:00 pm. Funeral Services will be held at the funeral home on Tuesday, December 31, 2019 at 11:00 am with an hour of viewing prior to the service. Interment to follow at Forest Hill Cemetery. Memorial contributions may be directed to the Henry County Transportation Network or a charity of the donor’s choice. Online condolences may be shared with the family at rodenbergergray.com.

The family of Elaine Harmon created this Life Tributes page to make it easy to share your memories.

Send flowers to the Harmon family.