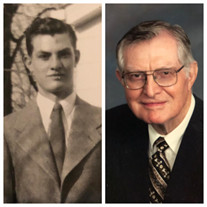 Edmund "Jim" George Peper Jr., 90, of Napoleon, died peacefully on December 15, 2019, at Genacross Lutheran Home in Napoleon. He was born on September 23, 1929, in Auburn, Indiana, to the late Edmund G. and Helen E. (Hall) Peper of Holgate, Ohio. He married Donna J. Bloom on March 18, 1956, in Swanton, Ohio. Edmund was a proud graduate of Holgate High School, Valparaiso University, and The Ohio State University Moritz College of Law. He was an attorney at the Peper Law Firm in Napoleon for 62 years (1957 to 2018), joining the firm started by his brother, Robert. His daughter, Melissa, joined the firm in 1994. He also served as Henry County prosecutor for 16 years. He had a huge clientele from throughout Henry County and beyond, and he thought of every client as a friend. They knew him for his honesty and integrity. Ed was a devoted member of Emanuel Lutheran Church in Napoleon. His Christian faith was very important to him. He taught Sunday School for many years and served on church council and many committees. Ed served as a member and chair of the Henry County Bank Board of Directors. He also served on the Napoleon Public Library Board, Filling Memorial Home of Mercy Board in Napoleon, and the Henry County Historical Society. Additionally, he was a longtime member and past president of Napoleon Rotary and the Henry County Bar Association. He also was a past member of the Ohio Board of Governors for the Ohio State Bar Association and served on numerous committees for the OSBA. He was a longtime member of the Ohio State Alumni Association, and an extremely devoted fan of the Ohio State Buckeyes as a football season-ticket holder for more than 45 years. Some of his happiest moments in life were attending games with his family. Ed was named after his father, but his brother Bob nicknamed him “Jim” and he was known by that name in Holgate where he was an outstanding basketball player in high school. Following graduation from Valparaiso, he was immediately drafted into the Korean War. He served in the U.S. Army and rose to the rank of Sergeant. He was a member of the American Legions in Napoleon and Holgate. He and Donna enjoyed ballroom dancing. They especially loved to travel with their family and took many trips around the U.S. He dearly loved his family trips to the Outer Banks in North Carolina which spanned decades. An avid photographer, he won numerous awards at the Henry County Fair and elsewhere. As a historian, he gave countless talks about the history of the founding of Henry County and its towns. He also was known as an expert on Abraham Lincoln and the Civil War, but also gave talks on the Revolutionary War and World Wars I and II, among other topics. He is survived by children, Melissa (Dan) Peper Firestone, Christian (Maureen) Peper, Emily (Kurt) Tempel, and Belgian exchange-student son Luc (Susan) Dendievel; grandchildren, Carson and Wyeth Firestone; Greg (Emily) Peper, Jenna Peper, Victoria (Ethan) Patrick, and Theresa Peper; Quinn, Hannah and Olivia Tempel; Derek (Leen), Bryan, Tyler, and Kevin Dendeviel; great grandchildren, Lorelai Peper, Elowen Patrick, and Simme and Nio Dendievel; He was preceded in death by his beloved wife, Donna; dear daughter, Sarah J. Peper; and brothers, Robert B. Peper and William H. Peper. Funeral services will be held on Saturday at 11 a.m. at Emanuel Lutheran Church, Napoleon. Visitation will be held Friday from 3-7 p.m. at Rodenberger-Gray Funeral Home, Napoleon. In lieu of flowers, the family asks that memorial contributions be made to Emanuel Lutheran Church, Napoleon Public Library, Henry County Historical Society, or the donor's choice of charity.

The family of Edmund "Jim" Peper created this Life Tributes page to make it easy to share your memories.

Send flowers to the Peper family.