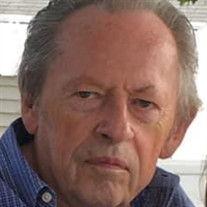 E. John Fryman, Jr., 81, of Napoleon passed away on Wednesday, December 23, 2020 at Genacross Nursing Home, Napoleon. He was born in McClure, Ohio on July 12, 1939, to Emmet J. and Beatrice 0. (Macklin) Fryman and a 1957 graduate of McClure High School. He was formerly a general manager for Tem-Cole, Inc. in McClure for over 25 years where he began his career with the company in the 1950's. In 1968, he purchased Fryman's Bottle Gas Sales and Service from his father, becoming the owner until the 1980's. From 1982-85, he was president of Quaker City Produce in Philadelphia, Pennsylvania. In his later years, he began his own produce and transportation logistics company, TC Marketing, Napoleon, serving as chief executive officer. A longtime member of the Napoleon Elks Lodge, he was a former member of the Toledo Yacht Club. He was well-known as "Papa" to his six grandchildren and four great-grandchildren. He loved spending time with them while supporting their own activities ranging from school-related events to dance recitals. Surviving are two sons, E. John (Trina) Fryman, III of Bryan and Richard (Celeste) Fryman of Napoleon, a daughter Sue (David) Bowen of Fremont, Indiana, a sister Doris Jean Ealey of Maumee; six grandchildren, Lindsey (Brad) Hicks, Luke Bowen, Karlee (Nick) Froggatt, Cody Beldon, Ethan Fryman and lrelyn Fryman; and four great-grandchildren, Blake, Lilah, Boston and Lauren Hicks. He was preceded in death by his parents and two sisters, Elaine Johnson, and Mary Weimer. Friends and family will be received at the McClure United Methodist Church on Tuesday, December 29, 2020 from 10:30 until the time of services at 1:00 PM. Interment will follow at Hockman Cemetery, McClure. Memorial contributions may be made to the McClure Parks General Fund or a charity of your choice. Online condolences and messages may be shared with the family at rodenbergergray.com Due to the current health conditions surrounding COVID-19, masks will be required to attend services or visitation in accordance with the State. Please also respect social distancing and make use of the website to contact the family if you are not feeling well.

The family of E. John Fryman Jr. created this Life Tributes page to make it easy to share your memories.

Send flowers to the Fryman family.