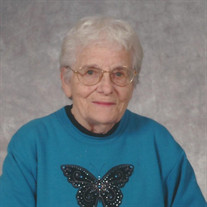 Dorothy M. Ruder, 94 of McClure, Ohio died peacefully on Monday, March 21, 2022 at Napoleon Lutheran Home-Genacross. She was born August 22, 1927 in Durham, North Carolina to the late James and Ethel (Davis) Taylor. On January 30, 1946, she married Bud Ruder at High Point, North Carolina and he preceded her in death on February 12, 1999. Dorothy worked as a cook at McClure School and Hoffman Produce and Temcole, both of McClure. She was a member of McClure United Methodist Church and McClure American Legion Auxiliary since 1951. She formerly played softball for McClure Highline Chicks and bowled in a women’s league. She also enjoyed cooking, shopping, gambling, and loved her dogs. She is survived by children, Bev (Mark) Shank, Mary Kieffer, and Jim (Brenda) Ruder; 9 grandchildren, 16 great grandchildren; and a brother, J.C. Taylor. She was also preceded in death by a son-in-law, Ralph Kieffer, and 2 grandsons. A memorial service for Dorothy will be held at a later date. Memorials may be directed to McClure American Legion Auxiliary 230 South East Street. McClure, OH 43534 or Henry County Humane Society 1136 Independence Dr. Napoleon, OH 43545.

The family of Dorothy Ruder created this Life Tributes page to make it easy to share your memories.

Send flowers to the Ruder family.