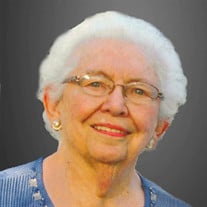 Dorothy Gerken Livestream Video- Click Here. https://www.youtube.com/watch?v=utDyOjYUlJU Dorothy Anna Gerken, 86, of Napoleon, Ohio died peacefully on Thursday, April 16th, 2020 at Genacross Lutheran Home, Napoleon, Ohio. Dorothy was born March 15, 1934 at home in Defiance County to the late Anton and Wilhemina (Lineau) Wiemken. With a caregiver’s patience and love, Dorothy was tasked with raising her six younger siblings after her mother’s passing at a young age. On September 19, 1954, she married Henry August Gerken at Bethlehem Lutheran Church -Adams Ridge. Once again, she became a caregiver after her father’s passing when her three younger siblings moved in with her and Henry. Dorothy was a homemaker and worked at Napco Plastics for 30 years. She was a faithful member of St. John Lutheran Church Freedom Twp., where she was active in the Woman of Freedom, sang in the church choir, and taught Sunday School. She was a 4-H advisor for the Gerald Busy Fingers for several years. She is survived by her husband, Henry; children, Beverly (Michael) Becker of North Olmsted, Randall (Liza) Gerken of Napoleon, and Bethann Gerken of Archbold; step grandchildren, Kevin Becker, Amy Becker, Brittany Trolio, and Jerid Stine; step great grandchildren, Mia, Rownan, and Ezra Trolio; and siblings, Louisa (Robert) Blue of Hamler, Henry (Rose) Wiemken of Napoleon, and Norman (Kathleen) Wiemken of Defiance; and a sister-in-law, Judy Wiemken of Baton Rouge, Louisiana . She was also preceded in death by brothers, Frederick and Edward Wiemken, and a sister, Elmina Backhaus. Due to the current health environment, a private service will be held at 11 a.m. on Monday, April 20th at St. John Lutheran Church-Freedom Twp. The service will be live streamed and you may go to Dorothy’s tribute page at www.rodenbergergray.com to access the service. Interment will be held at St. John Lutheran Cemetery. Memorials are suggested to St. John Lutheran Church, Grace Hospice, or the Lutheran Hour and can be mailed to Rodenberger-Funeral Home 1010 Westmoreland Ave. Napoleon, OH 43545. Dorothy’s family would like to extend a special thanks to the staff at Genacross and Grace Hospice for all their care and support.

The family of Dorothy Anna Gerken created this Life Tributes page to make it easy to share your memories.