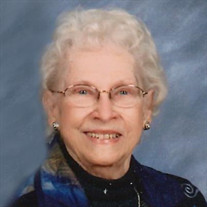 Doris Ann (Davies) Ruby passed away at CHP Hospice in Defiance, OH on September 4. 2019 at the age of 97. She was born in Portsmouth, OH on February 6, 1922, the only child of Donald and Edna (Griver) Davies. She graduated with Distinction from Portsmouth High School in 1940 and then attended Ohio University in Athens receiving her degree in Elementary Education in 1944. She taught first grade in Scioto County, OH from 1942-1952. After her marriage to George Robert (Bob) Ruby on November 10, 1951 she taught in various locations while her husband was in the USAF including Limestone, Maine and Bermuda. Upon her husband’s retirement from the military, they settled near Napoleon, OH. Doris taught one year at Holgate Schools from 1967-1968 and then taught first grade at Florida Elementary in the Napoleon Area School District from 1968 until her retirement in 1981. She was named an Outstanding Elementary Teacher of America in 1973. Doris was a member of The Delta Kappa Gamma Society for teachers for over 70 years and Historian for the Beta Zeta Chapter of DKG for many years. She was a Life member of the Ohio Retired Teachers Association and a Life member and past president of the Henry County Retired Teachers Association. Doris also served as past president of the Florida Arbor of the Gleaners. She volunteered her time with the American Cancer Society resource center, Red Cross bloodmobiles, was a past 4-H advisor and Cub Scout den mother. She was a member of the Florida United Methodist Church. In addition to her love for teaching and volunteering, she enjoyed flower gardening and spent many years helping with the flower shows at the Henry County fair as a member of the former Florida Spade and Trowel Garden Club. Doris is survived by her sons Mark (Diane) Ruby of Cary, NC; Phillip (Lucinda) Ruby of Napoleon; Rex (Sue) Ruby of Defiance and son-in-law Dave James of Ashland, OH. She is also survived by grandchildren Allison (Aaron) Snitzer; Daniel (Christine) Ruby, Michael (Kirsten) Ruby, Paul (Brittany) James, Joseph James, Mary (Jay) Hinkel, Mathias Ruby and Katlyn Ruby and step-grandson Ron (Cassie) Boyd II. She had six great-grandchildren with two great-granddaughters on the way, two step great-grandchildren and one step great-great-grandchild. She was preceded in death by her husband George (Bob) Ruby in 2013; daughter Carol James in 2019 and step great-great-grandchild Ella Marie Jo Dickerson in 2015. Friends and family will be received at the Rodenberger-Gray Funeral Home, Napoleon on Sunday, September 8, 2019 from 2 PM until 6 PM. Visitation will continue at the funeral home on Monday, September 9, 2019 from 10 AM until the time of services at 11 AM. Interment to follow at Riverview Memory Gardens. Memorial contributions may be made to CHP Hospice or the American Cancer Society. Online messages and condolences may be shared with the family at rodenbergergray.com.

Doris Ann (Davies) Ruby passed away at CHP Hospice in Defiance, OH on September 4. 2019 at the age of 97. She was born in Portsmouth, OH on February 6, 1922, the only child of Donald and Edna (Griver) Davies. She graduated with Distinction... View Obituary & Service Information

The family of Doris Ann Ruby created this Life Tributes page to make it easy to share your memories.

Send flowers to the Ruby family.