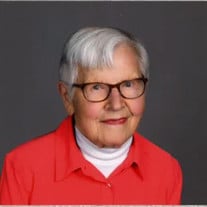 Dora Wilhelmina Titgemeyer died at the Napoleon Lutheran Home on Saturday, April 30, 2022. She had been a resident there for a short time. Dora was born January 10, 1927, in Freedom Twp., Henry Co., OH, to the late Carl L. and Emelia M. (Lohse) Eggers. She was baptized on February 6, 1927, and confirmed on March 17, 1940, at St. Paul’s Lutheran Church, Napoleon Twp. She was a graduate of Ridgeville High School and Bowling Green State University. Over the years, she taught English and Latin at Sandusky High School, Swanton High School and Ridgeville High School. Dora met the late Theodore W. Titgemeyer at BGSU, and they were married at St. Paul’s Lutheran Church, Napoleon Twp. on August 8, 1948. After both taught for a few years, they moved to rural Napoleon where they farmed for many years. Dora was a member of Emanuel Lutheran Church, Napoleon, and served there in many capacities, including as church secretary and with the Women of the Church. She was also a member of Alpha Literary and Music Society and the Henry County Retired Teachers Association, as well as several bridge clubs. In addition to working on the farm as needed, Dora was an expert seamstress, cook, baker and gardener, collected bells, was recognized as the family grammar expert and remembered everyone’s birthday. She is survived by her children, Sylvia Titgemeyer (Michael Allison), St. Louis, MO, and Evan (Lori) Titgemeyer, Manhattan, KS, and grandchildren, Austin and Flannery Allison, and Taylor and Jack Titgemeyer. In addition to her parents and husband, she was preceded in death by her brother, Henry L. Eggers, and her sisters, Marie A. Heuer and Helen C. Landman. Funeral services will be held at 11:00 a.m. on Friday, May 6, 2022, at Emanuel Lutheran Church, Napoleon. Interment will follow at Glenwood Cemetery. Visitation will be held on Thursday, May 5, 2022, from 3 - 7 p.m. at Rodenberger-Gray Funeral Home, Napoleon and 10-11 a.m. on Friday at the church. Memorials are suggested to Emanuel Lutheran Church, Napoleon to the Good Samaritan or Music Funds or the charity of the donor’s choice.

Dora Wilhelmina Titgemeyer died at the Napoleon Lutheran Home on Saturday, April 30, 2022. She had been a resident there for a short time. Dora was born January 10, 1927, in Freedom Twp., Henry Co., OH, to the late Carl L. and Emelia M. (Lohse)... View Obituary & Service Information

The family of Dora Titgemeyer created this Life Tributes page to make it easy to share your memories.

Send flowers to the Titgemeyer family.