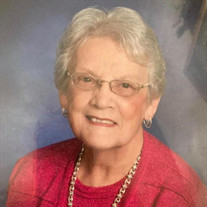 Donna M. (Donnie) Daman passed away at home, surrounded by family, September 12, 2021. She was 91 years old. Donnie was born September 10,1930 in Hamler, Ohio to the late Lawrence and Esther (Rettig) Meyer. On March 25, 1951, she married Orville Daman, who preceded her in death December 15,1983. Donnie was a skilled homemaker, and also found time to work outside the home. From a Defiance Schools secretary, to payroll clerk for Daman & Daman, to an election worker, to an early morning baker and barista, Donnie was a well-recognized face in the community. She also accumulated many miles walking and biking the neighborhoods. Donnie was also instrumental in the development of the original Henry County Hospital gift shop. Donnie is survived by daughters Mary Wesche, Napoleon, Ohio, Julie Daman, Findlay, Ohio, and son Brad (Deb) Daman, Napoleon, Ohio. She also has four grandchildren: Gretchen Wesche, Washington DC, Sam Wesche, Napoleon, Ohio, Ryan Daman, Napoleon, Ohio, and Nicholas Daman, Fenton, Michigan. She was preceded in death by Gregory Wesche, son-in-law. The family would also like to thank the special caregivers who helped Donnie continue her journey at home: Andrea, Josie, Katelyn, and Kristin. They went above and beyond what was asked of them without hesitation. Funeral Services will be held at 11:00 am, Thursday, September 16, 2021 at Emanuel Lutheran Church, Napoleon. Interment will follow at Glenwood Cemetery. Visitation will be at the Rodenberger-Gray Funeral Home, Napoleon on Wednesday, September 15, 2021 from 4:00 - 8:00pm, and 1 hour before the service at the church. Suggested memorials may be made to: Emanuel Lutheran Church, the Alzheimer's Association, and Hospice of Toledo. Online condolences may be made at: www.rodenbergergray.com

Donna M. (Donnie) Daman passed away at home, surrounded by family, September 12, 2021. She was 91 years old. Donnie was born September 10,1930 in Hamler, Ohio to the late Lawrence and Esther (Rettig) Meyer. On March 25, 1951, she married Orville... View Obituary & Service Information

The family of Donna M. Daman created this Life Tributes page to make it easy to share your memories.

Send flowers to the Daman family.