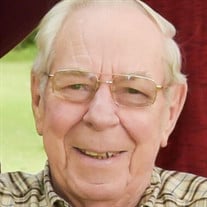 Donald M. Stange, 88, of Napoleon, Ohio died Sunday, July 4th, 2021 at the Fulton County Health Center. He was born August 24, 1932 in Toledo, Ohio to the late Carl and Marion (Damschroder) Stange. On September 7, 1957 he married Lois Bolen at Oak Park, Illinois. Don was the Mayor of the City of Napoleon from 1996-1999. He was the former co-owner of Frost Insurance for over 20 years. He was a member of First Presbyterian Church, Napoleon and the Bert G. Taylor American Legion Post. He served in the United States Navy during the Korean War. He was an avid hunter and fisherman. He is survived by his wife, Lois; daughters, Jean (Paul) Jankord and Lynn (John) Yarnell; grandchildren, Kathyrn (Ben) Bachinsky, Gregory Jankord, Troy Yarnell, and Megan (Bart) Housholder; and 4 great grandchildren. He was preceded in death by brothers, Therbert, Lauren, and Charles Stange. A memorial service will be held at 4 p.m. on Saturday, July 10th at Rodenberger-Gray Funeral Home, Napoleon, where a memorial gathering will be held from 2-4 p.m. A private interment will take place at Glenwood Cemetery at a later date. In lieu of flowers and gifts, memorials are suggested to Ronald McDonald House Charities, Toledo or First Presbyterian Church, Napoleon.

The family of Donald Stange created this Life Tributes page to make it easy to share your memories.

Send flowers to the Stange family.