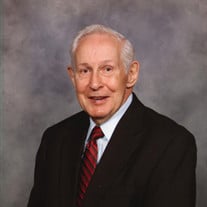 Donald G.W. Pacey, 96, of Napoleon, Ohio passed away on October 29, 2021 at his home, surrounded by his family. He was born in Holgate, Ohio on January 31, 1925, to Ernest and Audrey (Burkhart) Pacey. He married Donna Jeanne Yaichner on October 4, 1947. Don was a 1943 graduate of Napoleon High School and entered the US Army Air Corps, serving in WWII. After the service he worked for United Telephone Company until he retired in 1983. Don was a lifelong member of St. Paul Lutheran Church, Napoleon, where he served on various boards. He was also a life member of the American Legion Post #300, VFW Post #8218, and the 301st Bomb Group Wings Association. Don was active in the Northwest Pioneer Association Club #0421, and the Air Force Gunners Association. Don loved family gatherings with 2 on rye and a bowl of soup. He was a proud spectator of his grandchildren and great grandchildren’s sporting events, musicals and class plays. Don had a zest for life and loved to tease. He loved his family and friends and was loved by many in return. Don was an avid fan of the Detroit Tigers and the Toledo Mud Hens. Don is survived by his daughter, Cathy (Rodger) Hefflinger; granddaughters, Teresa (Mark) Bilow and Jeanne (Rick Baden) Repass; great grandchildren, Ashley Niceley, Allison Repass, Abby Bilow, Kadie (Darryck) Shearer, and Alex Repass; great great grandchildren, Aiden Repass; Devyn, Kyrie, Schaden, and Reyna Shearer; brother, Arden (Helen) Pacey; and sister, Margaret Boger. Also surviving are unrelated grandchildren, Nicki and Bentley Cochran, Allayna and Ariella Ochoa; and special friend, Jo Kissner. In addition to his parents, he was preceded in death by his loving wife, Donna Jeanne; great granddaughter, Cassie Bilow; brother, Franklin Pacey; and sisters, Eleanor Weirauch and Mary Ann Klepplinger Friends and family will be received at St. Paul Lutheran Church, 1075 Glenwood Avenue, Napoleon, on Wednesday, November 3, 2021, from 12:00 PM until the time of services at 2:00 PM. Interment will follow at Forest Hill Cemetery. Memorial contributions may be made to St. Paul Lutheran Church or St. Paul Lutheran School. Online condolences and messages may be shared with the family at rodenbergergray.com.

Donald G.W. Pacey, 96, of Napoleon, Ohio passed away on October 29, 2021 at his home, surrounded by his family. He was born in Holgate, Ohio on January 31, 1925, to Ernest and Audrey (Burkhart) Pacey. He married Donna Jeanne Yaichner on October... View Obituary & Service Information

The family of Donald G.W. Pacey created this Life Tributes page to make it easy to share your memories.

Send flowers to the Pacey family.