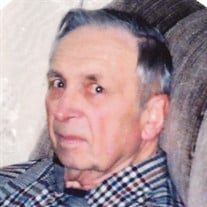 Donald A. Dickmann, 85, of Napoleon, Ohio died peacefully on Sunday, April 21, 2019 at Northcrest Nursing Home, Napoleon, Ohio. He was born May 26, 1933 in Liberty Twp., Ohio to the late Louis and Amelia (Kruse) Dickmann. On October 30, 1955 he married Marian (Arps) Dickmann in Hamler, Ohio. Don was a 1951 graduate of Liberty Center and served in the US Army from 1953-1955. He worked as a finish carpenter for Howard Mitchell and then Vern Wachtman for a total of 43 years until his retirement in 1998. Don was a lifelong member of St. John Lutheran Church, Freedom Twp., where he has held several church positions. He was also a member of the Ridgeville American Legion. He enjoyed spending time with family and going fishing in Michigan. He is survived by his wife, Marian; son, Steven (Dawn) Dickmann of Napoleon; grandchildren, Jacob (Amanda), Cassandra, Lucas, Olivia, and Cameron; great grandchildren, Eli and Poppy; and brothers, Marvin (Judy) Dickmann of Napoleon and Eldon (Marie) Dickmann of Swanton, Ohio. Funeral services will be held on Wednesday, April 24th, 2019 at 11 a.m. at St. John’s Lutheran Church, Freedom Twp. Interment will follow at the church cemetery where military honors will be accorded by the Ridgeville American Legion. Visitation will be held on Tuesday from 2-7 p.m. at Rodenberger-Gray Funeral Home, Napoleon, Ohio and Wednesday from 10-11 a.m. at the church. The family suggests memorials to St. John’s Lutheran Church, Freedom Twp. or Hospice of Henry County. Online condolences may be made at www.rodenbergergray.com

The family of Donald Dickmann created this Life Tributes page to make it easy to share your memories.

Donald A. Dickmann, 85, of Napoleon, Ohio died peacefully on...

Send flowers to the Dickmann family.