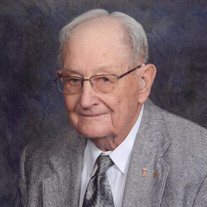 Donald C. Badenhop, 94, of Napoleon, Ohio died peacefully on Saturday, Sept. 18, 2021 at Vancrest Nursing Home, Holgate, Ohio. Don was born at home close to Gerald, Ohio on January 21, 1927 to the late George and Magdalena (Mueller) Badenhop. On April 21, 1949 he married Delores Buchholz at St. John Lutheran Freedom Twp. Church and she preceded him in death on June 6, 2018. Don was a lifelong farmer. He also worked as a mechanic and parts man at Meineke Sales and Service, worked at the Zehr fertilizer plant in Gerald, and mowed for Freedom Twp. He was a member of St. John Lutheran Church, Freedom Twp. He served in the US Army during WWII and was a member of the Ridgeville American Legion Post 454. He is survived by his children: Donna (Charles) Kurtz of Malinta, Darlene (Dennis) Hoffman of Holgate, Dean Badenhop, Daniel (Letty) Badenhop, and David (Suzanne) Badenhop, all of Napoleon; 12 grandchildren, 16 great grandchildren, 3 great-great grandchildren; and a brother-in-law, Frederick Buchholz, and sister-in-law, Barbara Buchholz. He was also preceded in death by a grandson, Matthew Hoffman; daughter-in-law, Sharon Badenhop; sister and brother-in-law, Irma (Victor) Lange; brother-in-law, Marvin Buchholz; and sister-in-law, Marian Buchholz. Funeral services will he held at 10:30 a.m. on Friday, September 24th at St. John Lutheran Church, Freedom Twp. Interment will follow at the church cemetery, where military honors will be accorded by the Ridgeville Legion Post. Visitation will be held on Thursday from 3-7 p.m. at Rodenberger-Gray Funeral Home, Napoleon and Friday from 9:30-10:30 a.m. at the church. Memorial contributions are suggested to St. John Lutheran Church, Freedom Twp.

The family of Donald C. Badenhop created this Life Tributes page to make it easy to share your memories.

Send flowers to the Badenhop family.