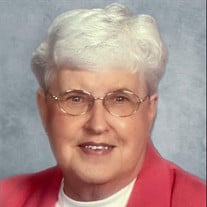 Dona M. Sonnenberg, 96, of Napoleon, Ohio died peacefully on Sunday, August 1, 2021, at the Napoleon Lutheran Home. She was born November 20, 1924, in Malinta, Ohio to the late Harry and Vena (Latta) Stevens. She was previously married to Cecil Finks, who preceded her in death in 1970. She then married Gilbert Sonnenberg on June 21, 1980, at St. John’s United Church of Christ, Holgate, Ohio. Dona worked at McCord Corporation, Wauseon, Ohio for over 40 years, retiring in 1987. She was a lifelong member of St. John’s UCC Church and served on the church council, memorial committee, and the visitation team. She also volunteered at the Henry County Hospital and the Shalom Food pantry at the church. She enjoyed crocheting, playing cards, puzzles, traveling, and polka dancing. She is survived by her husband, Gib; stepchildren, Craig (Jeanine) Sonnenberg, John (Beth) Sonnenberg, Cathy (Patrick) Dyer; sister, Janet Jones; 7 step grandchildren; 5 step great grandchildren, and a brother-in-law, Donald Ahleman. She was also preceded in death by a stepson, David Sonnenberg; siblings, Harry Stevens, Jr., Nelda Kepling, Una Mae Webster, Marilyn Ahleman, an infant brother; and brothers-in-law, Ferris Kepling, Keith Webster and Jim Jones. Funeral services will be held at 11 a.m. on Tuesday, August 10th at St. John’s UCC Church, Holgate. Interment will follow at the church cemetery. Visitation will be held on Monday from 4-7 p.m. at the funeral home and Tuesday from 10-11 a.m. at the church. The Family is requesting that masks be worn for those attending visitation and services. Memorial contributions may be made to the St. John’s UCC Church or the Shalom Food Pantry.

Dona M. Sonnenberg, 96, of Napoleon, Ohio died peacefully on Sunday, August 1, 2021, at the Napoleon Lutheran Home. She was born November 20, 1924, in Malinta, Ohio to the late Harry and Vena (Latta) Stevens. She was previously married to Cecil... View Obituary & Service Information

The family of Dona M. Sonnenberg created this Life Tributes page to make it easy to share your memories.